Despite 10Mbps being the minimum recommended speed for families under the Government Universal Service Obligation, our research, using data from Speed Checker Ltd, has found many areas that fall short.

The Orkney Islands, Shetland Islands and Highland are rated as the worst areas in the UK for broadband speeds. The Orkney Islands recorded the slowest average download speed at just 6.3Mpbs, which is shockingly low when compared with Tamworth where the average speed was recorded at 30.4Mpbs –  almost five times faster.

‘Far too many households across the UK are suffering from slow broadband speeds, which can stop you being able to carry out essential daily tasks. We are encouraging everyone with broadband to use our speed checker so people can see if they are getting the speeds that they’ve been promised by their provider and find out how to complain if their speed is too slow.’

‘This will also help to further highlight where problem areas are across the UK, putting pressure on government and providers to help everyone get a good broadband connection.’

How does your broadband compare? Use our new and improved Speed Checker Tool to see if you’re getting the speeds you’re paying for.

The list of regions with broadband slower than the recommended 10Mpbs also includes Ryedale, Purbeck, West Devon and Powys. While, along with Tamworth, Reading, Luton and Enfield get some of the quickest speeds.

The popularity of streaming services and downloading movies to watch at home highlights the significant gap in speed. In Ryedale, where the average speed is 9Mbps, it would take approximately 14 minutes to download a movie. The same film could be downloaded in half the time at the UK’s average broadband speed.

Check the table below to see how your region’s average download speed stacks up. 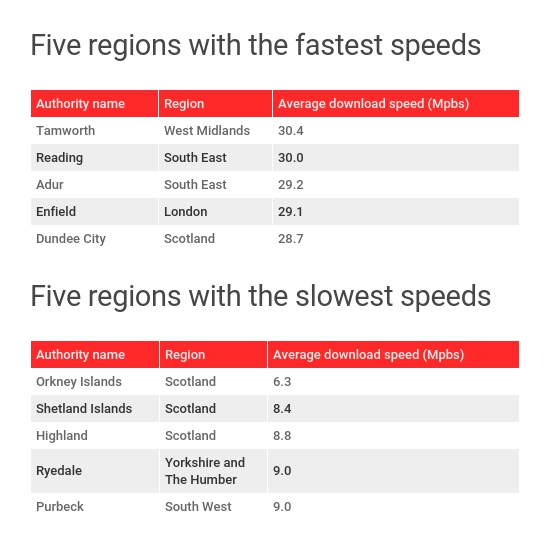 Better broadband for everyone

We’re campaigning for everyone to get better broadband speeds and, as our research shows, the speeds promised by leading providers aren’t being achieved in thousands of homes across the UK.

We’re touring the UK in the Fix Bad Broadband van to hear from you. We want to know if you’re sick of slow speeds, drop outs and poor service and with the information we collect from our online broadband speed checker we can identify the parts of the UK where the broadband doesn’t live up to the promises on the TV adverts. We’ll be presenting our findings to the government, regulators and broadband providers to help improve broadband across the UK.

We’ll also be offering advice on how to improve your service as well as how to complain and, in some cases, receive compensation for shoddy broadband.

Looking to switch? Read our guide to Best broadband providers.