Our snapshot investigation into kitchen prices has revealed striking differences in quotes for the same kitchen and layout from two branches of the same company. The unexpected addition of premium features and fluctuating discounts mean that you could be charged as much as 26% more in some branches than in others.

We sent undercover shoppers to visit two branches of six of the biggest kitchen brands – B&Q, Ikea, John Lewis, Magnet, Wickes and Wren Kitchens – and asked for quotes for a mid-range kitchen. They found their quotes could be anything up to 21% lower (or 26% more) than those from another branch of the same brand. In the case of one kitchen company, this price difference amounted to an extra £620.

If you’re buying a new kitchen, visit our kitchen reviews first to find out what kitchen owners think of well-known kitchen companies, from Ikea to John Lewis.

What caused the price differences?

Some of the differences in the kitchen prices we were offered boiled down to the way sales were applied. At Wren Kitchens, for example, while the pre-sale quotes were almost identical, one discounted price was 11% lower than the other for the same kitchen. At Magnet, one undercover shopper was offered a discount 14% lower than the other.

However, not all the discrepancies were due to sales. Although our shoppers asked for the basic options available for that kitchen, some prices were affected by stores adding extra fittings, such as soft-close hinges or end panels, to their quotes. This was the case at B&Q, the store with the biggest percentage difference in price, where one shopper was quoted 21% less than the other.

One B&Q store included premium drawers in its quote (costing an extra £124), while the other opted for standard. In another example, one Wickes store included three more end panels than the other (at a cost of £89 each, after discounts).

That’s not to say that some extras aren’t worth having – they can help to complete the look of the kitchen or make it easier to use. But some may be unnecessary, and it’s important to keep a close eye on what your salesperson is adding to your list of essentials.

Visit our kitchen costs page to reveal the precise price differences for each brand. Plus, find the average price for a mid-range kitchen from each of the companies we visited, to gauge how much you should expect to pay.

How can you save money on your kitchen?

Our snapshot research shows that it would be wise to visit more than one branch of the kitchen company you’re interested in, if you are able to. You might find that you’re offered a cheaper price or a better discount; at the very least, you may be able to use a second quote as a bargaining chip.

Ensure that you request a price breakdown, detailing each individual item, so that you are aware of what has been included in your quote and how much each thing costs. Find out what options are available for small fittings, such as hinges and handles, as well as the main units. That way, you can make an informed decision as to where to save and where to spend. If premium fittings have been suggested, you may find that you can swap them for standard alternatives to make sure that you come in under budget. 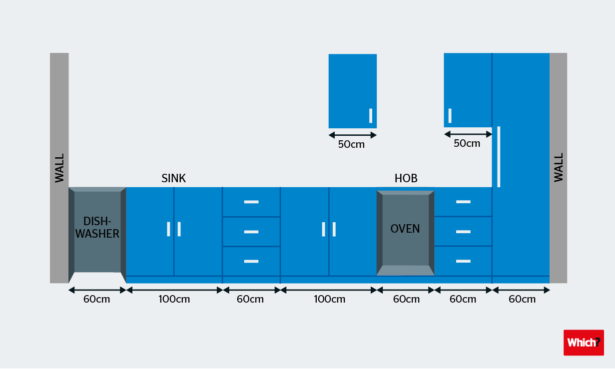 Using a set kitchen layout (see above), our shoppers visited two branches of each kitchen brand in June/July 2017 to ask for a quote for a new, mid-range kitchen. The brands identified a popular range and worktop, and drew up a quote including VAT but excluding installation fees.

The shoppers asked for everything they would need to fill the kitchen’s space, with basic fittings but no extras, such as taps or a splashback. Where we found that main items were incorrectly quoted, we made sure these were corrected.

You can find more details about our research on our kitchen costs page.