A single-to-double convertible buggy can be useful for a growing family. Perhaps you’re expecting twins, buying a pushchair for your first baby (but know you’ll want to be adding to your family at a later date), or already have a toddler but have another one on the way?

These double buggies are usually converted with the addition of extra fittings on the chassis, which often means you can fit two pushchair seats, carrycots or even car seats on at the same time.

Prices for these three iCandy double pushchairs range from £700 up to a hefty £1,040, and our tests found there’s a 2kg difference in weight from the heaviest to the lightest of the three, plus a host of other differences in what you get for your money.

Read on to find out which is the best double pushchair for you. Or visit all our pushchair reviews to compare iCandy pushchairs with other popular doubles. 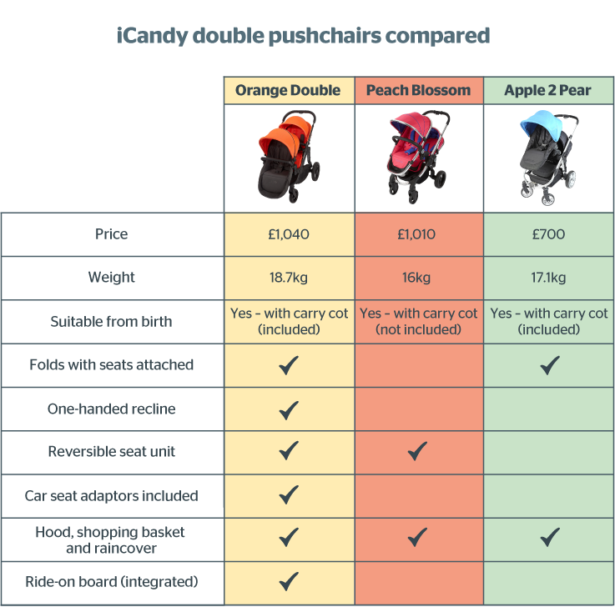 Find out more about how iCandy pushchairs compare, or use our pushchairs chooser tool to work out what type is best for your needs.

All three iCandy prams are convertible single-to-double travel systems. That means you can use them with a pushchair seat, carrycot or car seat with the correct attachments, for one or two children.

The prams are suitable from birth when transporting your baby in the carrycot (which is included with all three models), and from six months in the pushchair seat. This is because newborns and young babies need to lie flat, which is possible in a carrycot, but not always an option in a pushchair seat.

Only the Orange Double comes with car seat adaptors included. You’ll need to purchase them separately (at a cost of £30) if you opt for one of the other two models.

The weight of each of these pushchairs also varies, which, if you have to lug your pushchair up flights of stairs, or heave into the back of a car, is something to consider. The Orange Double is the heaviest, weighing 18.7kg, while the Peach Blossom is more than 2kg lighter, and the Apple 2 Pear sits in between at just over 17kg.

When we review pushchairs, we record their usable weight – that’s the real weight of the pushchair, plus everything you’d use with it. That way, you get the truth about exactly what you’re going to be pushing around.

While all three come with some of the more common accessories – a pushchair hood, shopping basket and raincover – the Orange Double price also includes a ride-on board for your older child to stand on while you’re pushing your baby.

Read our full reviews for the:

When we review pushchairs, prams and strollers, we’re not just looking at how each one compares on spec. We also put them all through rigorous testing in our lab. This includes:

Why are so many cot mattresses failing safety tests?