Holidaymakers who opt for travel insurance at the click of a button could be paying up to 18 times too much for inferior cover, according to an investigation by Which? Travel.

The add-on policies, offered as an extra when you book flights or holidays online, are not only overpriced but also often full of holes.

We rated the most important elements of 30 travel insurance add-ons, (including cover for cash, delays, cancellation, medical expenses and baggage), and almost half didn’t meet our minimum criteria for comprehensive cover. 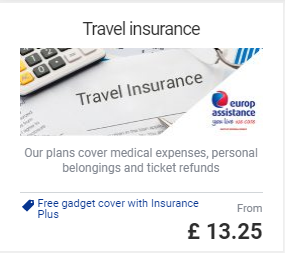 Spanish airline Vueling offers a week’s travel insurance for just £11.27 when you book flights. But if you’re forced to cancel or cut short your holiday with Vueling, you won’t receive a penny. Money, belongings and personal liability aren’t included, either.

In fact, the only thing Vueling’s add-on will cover you for is medical expenses. And with its limit capped at £10,000, this falls woefully short of our recommended minimum of £2m for Europe.

Break your hip in Spain and the cost of hospital treatment and flights alone could reach £15,000, a situation that would leave Vueling customers with no choice but to cough up at least £5,000 of their own money.

A spokesperson for Vueling pointed out that it offers six separate types of insurance for each specific need, including cancellation, missed flights and baggage. So for comprehensive cover you would have to buy in bulk, amounting to almost £50. That is unnecessarily time-consuming and expensive.

Unlike Vueling’s cover, the Tui policy we looked at was offered as an extra after the holiday was booked and paid for. The package holiday giant offers three tiers of protection: Silver, Gold and Platinum. But for single-trip cover for a week in Spain, even the Silver policy was £47.15. That’s almost four times more than Premier cover with Holidaysafe (£12.80), a standalone provider which performed well in all categories.

Despite the hefty price tag, Tui’s package received a dismal policy score of 37%. The excess was excessive at £150, and it offered zero cover for cash and only £750 for lost or damaged baggage – half the £1,500 we recommend as a minimum.

Tui’s USA cover wasn’t much better. When we added single-trip insurance to a fortnight’s trip to Orlando, while conducting our research in November 2017, the ‘cheapest’ premium came in at £111. That’s a fortune compared with Holidaysafe’s £15 equivalent.

Meanwhile, the most comprehensive cover cost a whopping £274 – 18 times pricier than Holidaysafe.

Tui claimed that cover for cash with its Platinum and Gold policies (£300 and £400) were ‘higher than the market average’ and that baggage limits were ‘sufficient’ as customers ‘don’t generally take valuable jewellery abroad’.

A spokesperson for Axa, which underwrites Tui’s insurance, told us that another add-on policy is offered to customers when they reach the checkout of their holiday booking – providing a more comprehensive level of cover.

According to our criteria, five out of ten European policies offered by popular airlines were not fit for purpose. The same was true for five out of ten holiday companies.

Thomas Cook Airlines, for example, fell short on cancellation and curtailment. Book its basic cover for £11.42 and you can claim only £500 if you’re forced to cancel or cut short your holiday – hardly enough to cover the cost of a holiday.

Neither KLM nor Ryanair’s Standard insurance offers scheduled airline failure, meaning you could be stranded abroad if either airline went bust. However, this cover is included in Ryanair’s Plus policy for an extra £4.

Easyjet and BA get it right

USING THE TABLE We analysed 30 insurance policies from airlines and holiday companies to find which offer the best value, worst value and worst cover. These have been compared with the good-value, high-scoring Premier policy with standalone provider Holidaysafe. All policies are based on a 64-year-old travelling to Spain for one week in June 2018. Cost: Rounded up or down to the nearest pound.  *Which? does not stipulate a minimum limit, but some level of cover must be included in the policy.  **To meet Which? criteria, the overall policy score, (calculated by rating the 22 most important elements) must be 65% or above. All research was conducted in November 2017.

Not all of the add-on policies spelled disaster for travellers. Easyjet came out on top for airlines. Its £20.72 European cover, underwritten by Zurich, received a policy score of 73%. BA Holidays was another success story, scoring 73% for its Value option (£13) and 89% for its Deluxe package (£21).

However, Holidaysafe’s standalone Premier policy trumped them all with 92%. What’s more, it also covers holidaymakers for unexpected events such as strike, volcanic ash and car breakdown, which were rarely included in the add-on policies we looked at.

Given that it takes less than five minutes to buy a far better standalone policy, it’s a small price to pay for peace of mind.