We’ve been taking a look at kitchen prices in the past year and found you shouldn’t feel pressured to buy a kitchen at a ‘bargain’ price in the January sales, as it’s unlikely to be much cheaper than the rest of the year.

We have delved into pricing data from Kitchen Compare, which collects prices and promotional messages from well-known kitchen companies, such as Ikea and B&Q.

Using a typical kitchen blueprint, Kitchen Compare tracks prices for a standard kitchen across the year, using prices that are available online or have been shared by the company in question.

Looking at pricing and promotional messages from 1 December 2017 to 1 December 2018, we’ve been able to pick out patterns that will arm you with the knowledge you need to get the best price for your kitchen.

Before you head into the January sales, visit our kitchen reviews to find out which company came top with an impressive customer score of 90%, and which was left behind with just 56%. Plus, find out which three kitchen companies scooped our Best Buy kitchen cabinet accolade.

Our analysis of the data shows that many kitchens stay around the same price for most of the year, but that January isn’t always the best time to buy. Below, we’ve listed examples from Homebase, Wickes, B&Q and Ikea.

We’re only able to look at prices for these four brands as they’re the only well-known kitchen companies that make their prices available online, or have shared their data with Kitchen Compare.

In mid-March this year, ahead of one of the biggest shopping periods for home improvement products, Homebase raised the prices of all of its flat-pack kitchens by somewhere between £80 and nearly £200, depending on the range.

Not long afterwards, it ran a promotion offering a £200 Homebase gift card when spending between £2,000 and £5,000, effectively putting the price of some of the kitchens back to what it was before the rise.

It dropped the price of four kitchens (some in different colour variations) by as much as £415 in early July, but these were raised in price by the same amount just before August, another key shopping time for home renovations.

Others dropped in price around this time, sometimes by similar amounts to when they were raised in March or July, bringing them back in line with the previous price.

Homebase ran other promotions at four main points of the year – April, July, August and September. These predominantly focused on half-price doors and cabinets in selected ranges.

When we checked online (20 December 2018), it was offering half off selected doors and drawer fronts, as well as 25% off some pre-assembled units.

Our graph below shows three of its kitchens that had some of the biggest drops and increases.

Find out what customers think of its customer service, quality and durability in our Homebase kitchen review.

Not all the companies vary their prices as much – B&Q and Ikea rarely changed their kitchen prices over the year.

It only ran one promotion, during which time there was potentially a saving to be made – 10% off for Ikea Family members from 21 December 2017 to 7 January 2018. It’s running the same offer this year, from 20 December to 13 January.

At the end of November, all of its kitchen prices changed again. Some decreased by just £5, the most they increased was by £22, and only one changed by anything considerable, dropping by £117.

B&Q didn’t run any promotions on its kitchens during the time period we looked at, so its kitchens are at a pretty steady value all year round.

Wickes changed its prices the most out of the four retailers we looked at, sometimes more than once in a month.

On the 22nd February the exact opposite occurred. The cream and grey options dropped to £1,214 while the white rose to £1,698. Fluctuations of this type continued throughout the year, but no other price variations were as significant.

It’s worth pointing out that some of its kitchens were more expensive in the traditional January sale period than they were at many other times over the year.

Like Homebase, Wickes also runs a variety of promotions for a lot of the year. For its Ready to Fit kitchens, it has had 10% off deals when buying online and up to 40% off a few kitchen ranges when you do click and collect.

For its Showroom kitchens, during some of the time between May and July, you could have saved £1,500 on appliances if you’d spent more than £3,000. From then for a month you could have got 50% off the installation.

As of mid-August this year, Wickes is currently operating a multi-buy promotion with 50% off five or more Showroom kitchen units. Additional savings, such as half-price installations or 15% off appliances, run for shorter promotional periods.

Our Wickes kitchen review reveals how its customer rate it, as well as the kitchen ranges and services it offers.

Although we only have pricing information for B&Q, Homebase, Ikea and Wickes, Kitchen Compare has collected promotional marketing messages for all of the household kitchen brands.

Like Homebase and Wickes, some other kitchen retailers run varying promotions for much of the year.

For all of the time we looked at, Wren Kitchens has run a multi-buy promotion that offers at least 50% off its kitchen units, as long as you are buying five or more. If you are buying a new kitchen, you’re likely to be buying at least this number of units, so it should apply to you.

It’s varied these by running additional time-limited promotions, such as an extra 25% off (last year’s Boxing Day sale), 20% off, 60% in total, and VAT-free with an extra 10% off fully built kitchen units.

When we checked its website on 20 December, it was offering the 50% off deal (five or more units), plus 15% off worktops and 20% off installation. It said these were ending in five days time. On 31 December, it was offering 50% off fully built kitchen units, 20% off installation and up to 15% off worktops, all when you buy five or more units.

With the data showing that when one type of promotion at Wren Kitchens ends, another similar one is likely to begin around the same time, you don’t have to fear losing out if you take your time.

Find out where it comes in our ranking of 10 kitchen companies in our Wren Kitchens review. 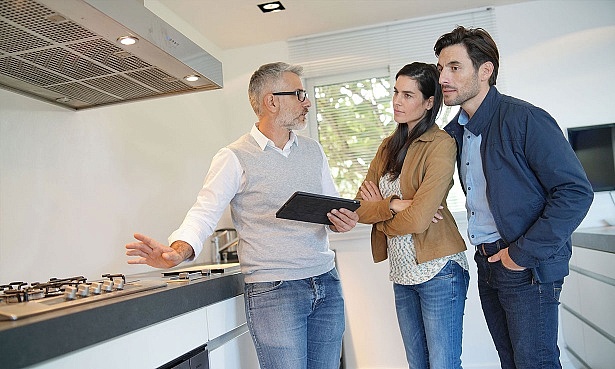 Magnet is another retailer that offers regular deals. For example, from Boxing Day to the beginning of March 2018, Magnet had a 50% sale. Starting on the 7 January, it had an extra 10% off the sale price. There was then a 23-day break before the ‘spring’ half-price sale.

This was immediately followed by another half-price discount, then a ‘summer’ half-price sale. After a month’s break, it had 50% off when you bought five or more units, which was still running at the beginning of December when we stopped looking at the data. The additional 10% was also applied at various times during the main ‘50% off’ promotion, but was not present all the time.

Visit our Magnet kitchens review for all you need to know on the brand and its customer ratings.

John Lewis had two sale periods in the time frame we looked at. One ran from the middle of December until mid-February and the other from mid-June to the beginning of December. These only applied to a few specific ranges, some of which were clearance ranges.

As we don’t have pricing data, we don’t know whether its prices fluctuate in accordance with this, or at any other time of the year.

But you can see what John Lewis’ customers think of its kitchens, and whether it was awarded a Which? Best Buy for its kitchen units by reading our John Lewis kitchens review.

When is the best time of year to buy a kitchen?

Our research shows that there is really no specific good time to buy a kitchen. For some retailers, such as B&Q and Ikea, price doesn’t vary much across the year, so you can feel safe in the knowledge that you can buy when it suits you.

For others, there is likely to be some sort of sale and/or promotional offer running in January, but also a similar discount running at most other times of the year.

Prices do fluctuate and offers do change, so depending on what you’re looking for, they might result in some small savings. But perhaps not by as much as the retailers might like you to think, so don’t feel pressured to buy just because there is a deal on.

Also make sure you look carefully at what the sale is actually covering. Wording sometimes implies that offers run across all kitchens, worktops or doors, when it might only be a small percentage of the range.

Visit our kitchen costs page to find out what else we discovered about kitchen sale prices when we previously investigated them. It also includes average prices for a new kitchen and different kitchen repairs.

Kitchen-compare.com is a third-party, independent price-comparison site owned and run by Insight Retail Group Ltd, with commercial interests in the home-improvement sector. We haven’t looked at promotional offers from Howdens Joinery or Benchmarx as they sell directly to trade, not consumers.