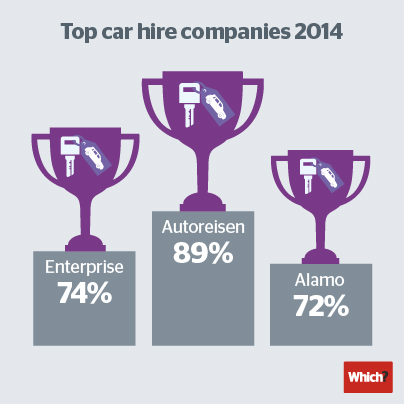 Auto Reisen has topped a Which? survey to reveal the best car hire companies. Heading a list of 12 companies, it received an impressive five stars in six rating categories including customer service, the process of returning the car and overall value for money.

In a separate investigation we also reveal the top five pitfalls to avoid when hiring a car, including high cost fuel policies and unfair charges for car damage.

Auto Reisen has come top of the tables in our annual car hire satisfaction survey for the second year in a row. The company achieved a customer satisfaction score of 89%, 15 percentage points ahead of second place.

Enterprise Rent-a-Car (74%) and Alamo (72%) came second and third respectively. Spanish car hire firm Goldcar came bottom, scoring just one star across seven of our 10 categories and its customer score slipped from 42% to 34% this year.

We also looked at car hire brokers; companies that allow you to compare prices and book from a range of car hire providers. Economy Car Hire was rated top with 75%, scoring five stars for the ease of its online booking and the clarity of its pricing.

The results of our latest annual satisfaction survey show an overall improvement in customer satisfaction within the car hire industry. Nine out of the 11 car hire companies who also appeared in last year’s survey have either equalled or bettered their customer score, with average ratings jumping from 59% to 64%.

When we launched last year’s survey, we called on car hire companies and brokers to clearly show all the compulsory fees and charges on their websites during the booking process.

Since then six hire companies have agreed to make fee information clearer on their sites. Alamo, Avis, Dollar, Enterprise, Hertz and National have all made the cost of their excess waiver policy clearer.

Of the brokers, Auto Europe has introduced a filter to its site that lets you see and select the fuel policy that’s right for you. Economy Car Hire now shows estimates of the cost of a full tank of fuel for customers required to buy a tank on pick up and return it with the tank empty.

Which? verdict on car hire companies

Which? executive director Richard Lloyd, said: ‘It’s good to see the car hire industry has stepped up a gear on customer satisfaction and, following our campaign, is being more upfront about extra charges.

There’s still a few miles left to go so we’ll be working with other European consumer groups to further improve the car hire market.’

You can see how each of the 12 car hire companies and six car hire brokers performed in the full table of survey results – these include ratings for customer service, value for money and clarity of pricing and charges.

In a separate investigation, we’ve also looked at the top five pitfalls to avoid when booking a hire car.

Protect yourself against charges for pre-existing or fictional damage when you pick up and drop off by being vigilant and taking photos to prove the condition of the car.

Take out a third-party excess policy in advance and bring the details with you. If you’re asked to buy more cover when you pick up the car, ask what this actually covers and show the agent what you’re already covered for.

The biggest fuel trick to watch out for is being charged for a full tank of petrol, at a price set by the hire company, and being asked to return it empty with no refunds for unused fuel. Once you have a quote, call the hire company before paying to check what its fuel policy is.

If you’re offered a car with toll collecting equipment fitted; ask about the rental costs, whether it’s a legal requirement for the country, and whether it can be turned-off at no cost to you.

Check your credit card bills or bank statements carefully after hiring a car. If you’re faced with unexpected charges, complain to the hire company – many of the cases we’ve seen have been resolved this way.