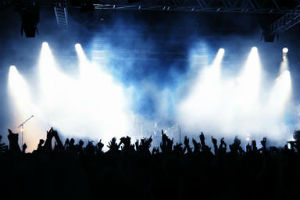 Which? spent eight weeks monitoring four of the biggest secondary ticketing websites and found evidence that the market is failing fans.

Tickets for most events are sold through the venue or through primary ticket websites such as Ticketmaster and See Tickets. But once tickets from these sources sell out, fans either miss out or pay over the odds on the secondary market – sites where tickets are sold at a mark-up.

The secondary market was originally labelled as a fan-to-fan exchange where anyone can resell tickets, but these sites have attracted touts operating on an industrial scale. There are even signs that certain ticket sites may be acting like touts themselves.

From August to October 2015, Which? monitored the four big secondary ticketing sites – Seatwave, Viagogo StubHub! and Get Me In! – and found:

The full investigation appears in December’s issue of Which? magazine. To discover the benefits of our expert reviews, join Which? today.

In a recent survey of 1,241 Which? members, 29% said they didn’t understand the difference between primary and secondary ticket companies. It doesn’t help that the distinction between promoters, venues, and primary and secondary ticketing agents is blurred through numerous takeovers and partnerships. Take Ticketmaster: it became a Live Nation company in 2010 and now owns two major secondary sites – Get Me In! and Seatwave. 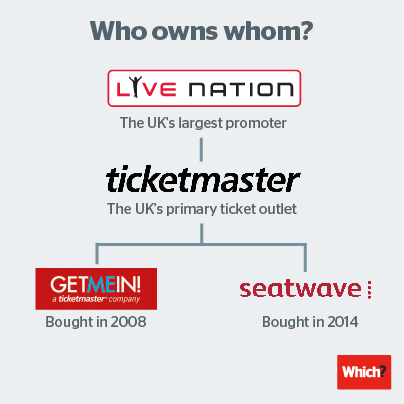 The Competition and Markets Authority (CMA) cleared the Ticketmaster merger with Seatwave in March 2015, having concluded that both Get Me In! and Seatwave would continue to face strong competition from Viagogo and StubHub!

Who sells on secondary sites?

It isn’t illegal to resell tickets for profit (with the exception of football tickets without express permission from the club), but it is likely that some of the selling patterns we encountered are only possible because of the use of ‘botnets’. This is software readily available on the internet and used by touts to harvest swathes of tickets the second they go on sale.

For popular shows they’re left with no choice but to find tickets on the hugely profitable secondary market where sellers regularly list tickets at three or four times the face value – we even saw tickets with a 1,760% mark-up.

There are also admin fees to pay, for example, Get Me In! charges buyers 15% to 18%, while fees at Seatwave, Viagogo and StubHub! vary depending on the event and ticket type. All four take another 10% to 12% from the seller in admin or ‘success’ fees.

Do sites sometimes buy tickets themselves?

StubHub!, which is owned by eBay, told us it does not own, purchase or price tickets to any event listed on its website. However, when Get Me In! sellers list tickets they must confirm whether they are affiliated with the event organiser, or with Get Me In! itself. We asked owner Ticketmaster how many people check these boxes, but it failed to answer directly.

The latest annual report from Live Nation Entertainment (Ticketmaster’s parent company) states that it may acquire tickets for resale ‘from time to time on a limited basis’. When we asked Ticketmaster it whether it sold tickets directly to its sister resale sites, it said those sites ‘do not have a policy of acquiring tickets for resale in their own right.’ It declined our request to explain either of these statements further. Viagogo failed to respond to any of our questions.

If tickets are channelled directly to resale platforms, without consumers getting a chance to buy them at face value, they are being cheated.

Getting round the rules

There’s also a risk of fraud on ticket resale sites because sellers don’t have to prove they actually have the tickets they list. All four of the sites we looked at promise refunds or replacements for fake tickets, and sellers are usually paid after the event, to deter false listings. But StubHub! admits that some ‘carefully vetted’ sellers are paid beforehand.

Under the Consumer Rights Act, consumers must be notified of any restrictions, all seating details and the original face value of the ticket. Ticketmaster told us its secondary sites would ultimately remove listings that fail to comply, yet Which? has found these rules being repeatedly flouted on all the major secondary ticketing sites.

We have sent our evidence to the Department of Culture Media and Sport as part of an investigation it is carrying out into secondary ticketing.

Ways to beat the touts