If you own an SUV, you’re paying a hefty premium in fuel compared with owners of regular cars of similar sizes.

Which? research shows that all classes of SUV – compact, small, mid-size and large – have significantly poorer fuel economy on average than cars of around the same size.

If you own your SUV for four years, that’s a huge amount extra in fuel you’ll be paying – as much as £1,600 more, in the case of large SUV owners.

We’ve compared each size of SUV to regular cars of a similar size – see the results below. We also reveal how you can cut your fuel costs, whatever car you drive.

Our expert lab tests independently verify each car’s fuel efficiency, so you can trust you’ll save on fuel costs with one of our best cars.

Our costs are calculated for normal-style driving; a mix of urban, out of town and motorway driving. We use realistic MPG data from our independent lab tests on each car we’ve reviewed, to reflect what a typical driver should expect to pay when driving.

We’ve used the average annual mileage of all Which? reviewed cars for these comparisons, which is 9,700 miles, taken from our annual Which? Car Survey of UK car owners.*

Since small car owners are an exception in driving significantly less than this annually (8,400 miles on average), some owners will pay less than these figures if they have lower annual mileage.

They may look beefy, but compact SUVs really are a similar size to small cars. Both the UK’s best-selling small car, the Ford Fiesta, and the Nissan Juke compact SUV are around 4m long and 1.9m wide. Though the Juke is around 9cm taller.

However, diesel is in the docks due to emissions scandals and high NOx levels. But that doesn’t mean you can’t find cleaner cars among them – see diesel cars that produce the most and least NOx.

The difference in fuel costs grows as cars get larger. 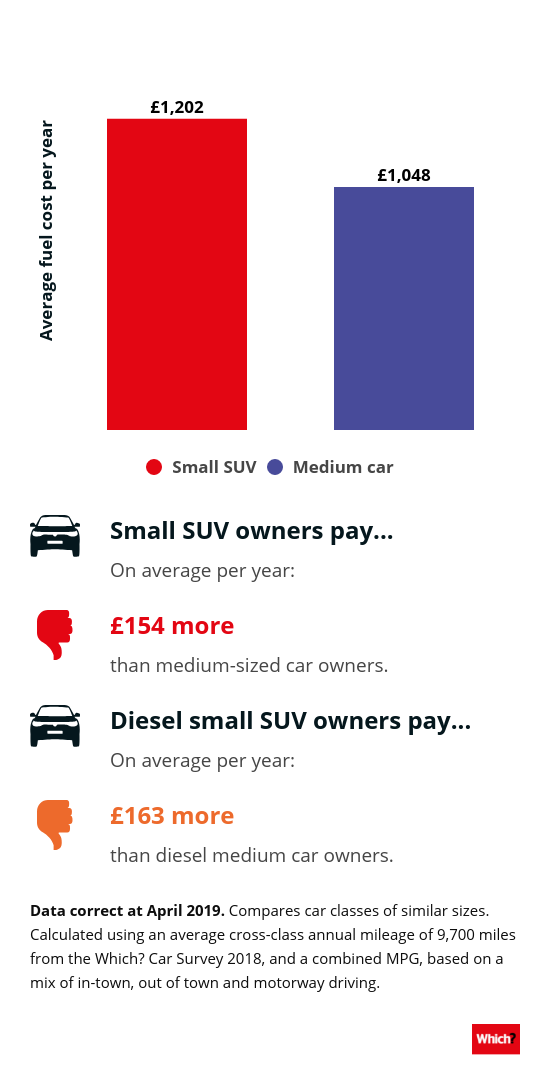 Choosing a diesel SUV is no guarantee of narrowing this cost difference. In fact, our data shows that, compared to compact SUVs vs small cars, there’s a larger difference between what a small diesel SUV owner pays compared to medium diesel car owners.

Although the overall cost of diesel fuel will be lower compared to petrol, as diesel cars are, on average, more economical.

Owners of medium cars drive on average 9,700 miles a year – identical to the cross-class average we’ve used for comparison purposes.

Interestingly, mid-size estate owners pay a little less on average for fuel a year than comparable (not SUV) car classes – £1,077 versus £1,100.

Driving some of the biggest cars on the road, large SUV owners are splurging out a gigantic £409 premium on average over similar-sized cars in other classes. They burn through £1,561 in fuel costs over the course of a year.

To the chagrin of large SUV owners, drivers of large estates and large people carriers enjoy paying not much more on average on fuel than their mid-size counterparts, making them wiser choices for those that need lots of space but want to save on fuel.

In fact, they even slightly beat the fuel costs of medium-sized SUVs for normal driving.

Cutting down on fuel costs while driving 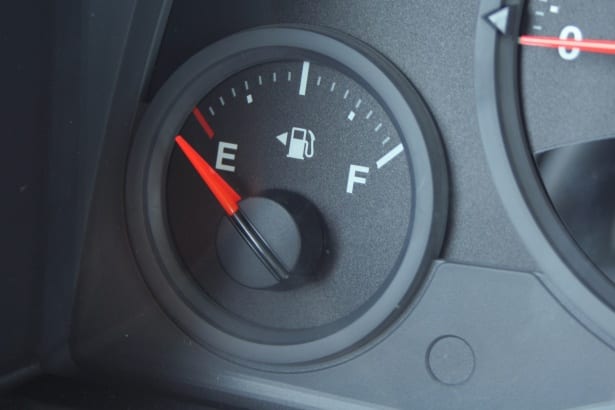 The way you drive can have a huge effect on how often you’ll need to fill up your tank. Here are some tips on improving your fuel economy:

Want to calculate your own fuel costs? Use our annual fuel cost calculator.

We calculate ‘normal driving’ by using a combined MPG (miles per gallon) figure which takes into account that normal drivers spend their time in a mixture of urban areas, out of town and on motorways.

For comparison purposes, fuel costs are calculated using the proportional average annual mileage, which is 9,700 miles.* We took an average of the costs for petrol and diesel cars from all Which? reviewed cars for each of the comparisons.

Fuel costs have been calculated using average petrol and diesel costs for the UK in March 2019, according to PetrolPrices.com.

We have taken the average MPG figures across all fuel types in each class for the comparison, including petrol, diesel, petrol-hybrid and diesel-hybrid cars. We’ve combined compact and mid-size people carriers together into one class for data comparison purposes.

All sales data is taken from the SMMT.

All models named are examples of cars in the classes.