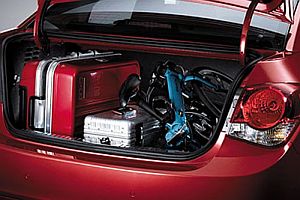 Which? experts devote a lot of time to testing cars, but an important part of how we judge them comes from you, the car owners.

In the latest Which? Car Survey we asked you to share more about the ownership experience by rating your car in a number of different areas, ranging from exterior styling to build quality. Here we reveal the cars you rated as the most and least practical.

Predictably, estate cars and MPVs score well, but size isn’t everything when it comes to practicality – as the third-placed Toyota Yaris Verso proves. However, four out of the five least practical cars are superminis.

Rated by you – the most practical cars

Scoring a very impressive 99%, the Skoda Superb estate offers plenty of space for luggage and passengers alike. Owners commented on the “large and flexible interior” and how “it is ideal for transporting four adults with luggage on holiday”. We measured the boot capacity at 475 litres, which makes it one of the most capacious estates we’ve tested.

The Mercedes E-class estate comes second in our list. Ample room for front-seat passengers and a 515-litre boot are highlights from our test. Owners are big fans of the boot space, commenting that it is an “extremely practical load-lugging estate” and a “supreme load carrier with clever tailgate and rear-seat operation to make loading hassle-free”.

Waving the flag for practical superminis is the now-discontinued Yaris Verso. This car is great is you’re looking for a spacious cabin and versatile boot. One owner said: “Its versatility has suited my needs and lifestyle better than any other car I have ever known.” Unfortunately the Yaris Verso is quite hard to find second-hand – owners love them so much they tend to keep them a long-time.

Although replaced in 2008, it’s the earlier 1998-2008 Berlingo Multispace that owners really love for practicality. It’s cheap to buy and run and is a true multi-purpose vehicle (MPV). There is plenty of headroom, very generous front-seat accommodation and a huge, well-shaped boot. One owner notes the “great space, back seats fold that down easily to make a huge boot area, excellent legroom for back-seat passengers and a high roof that is good for transporting bulky items”.

The Skoda Superb manages to top and tail the top five spots, this time in ‘saloonback’ guise (it has both hatchback and saloon boot openings). This boot is a feature our testers were impressed with, and one owner told us the “split-opening boot is extremely practical” – along with the masses of legroom given to passengers.

Rated by you – the least practical cars

When BMW launched the Mini Convertible in 2004, its iconic supermini reached a whole new level of cool. The front seats are easy to get into, but that’s as far as it goes concerning practicality. A measly boot left this owner frustrated: “My boot is the size of a shoe box. Seriously, I can just about fit my gym bag in.”

The Alto is the smallest car that Suzuki sells in the UK. Not only does it have a poor reliability record and weak engines, but it seems owners don’t rate it highly for practicality. One Alto driver appears to be particularly frustrated, exclaiming “the tiny boot drives me mad!” whilst another says that there is “no great space in the back seats”.

Essentially the Pixo is a badge-engineered Suzuki Alto that’s built in India – the only differences are minor styling, trim and badging, so it’s no surprise to see them side-by-side here. Again, owners have reservations around boot space, with one stating “the pathetically small boot” is their biggest annoyance with the car.

This retro hatchback has style, a unique interior and is fun to drive. What is missing, however, is practicality. The boot, at 150 litres, is small even by city car standards and it’s cramped in the rear, with poor room for child seats. Owners have also noted that it is “tricky getting into the back for older people.”

The MX-5 is fun to drive and offers good performance. Being a sports car, practicality was never going to be its strong point, but owners felt was worse than almost any other car. The boot is very small, at 135 litres, and when one owner was asked what their biggest frustration was, there was an simple answer: “The storage space – the boot is too small and there are no back seats to put things on!”