Cars today are safer than ever before, especially since features such as electronic stability control have become mandatory for any new model sold within the UK. And with buyers expecting more from their vehicle, active safety technology – autonomous braking, for example – is becoming increasingly common too.

The Volvo XC60 has been named the safest vehicle tested by independent organisation Euro NCAP in 2017. It impressively scored nearly 100% in two of Euro NCAP’s safety tests, receiving a full five-star rating.

Just behind it is the VW Arteon. It joins two other Volkswagen cars to be named in Euro NCAP’s top five, setting the standard in their respective model classes and proving the German carmaker’s commitment to making safer cars across its range.

For the majority of buyers, safety is paramount when choosing a new vehicle. These results reveal the best new models on the market for keeping you, your passengers and pedestrians as safe as possible.

The Which? Car Survey 2018 is now open. Take part and not only could you win £2,500*, but with your help we’ll find the most and least reliable cars on UK roads. (Terms and conditions apply.)

We helped set up Euro NCAP in 1997, and continue to use its crash results as part of our evaluations. If a car tested by Euro NCAP scores three stars or fewer, we make it a Which? Don’t Buy car.

How did the five safest cars score?

All of the top cars received a full five-star rating in Euro NCAP’s latest and most stringent testing programme ever. The highest overall performer was the Volvo XC60.

This £35,000 4×4 effectively protected the crash test dummies from whiplash, and its autonomous emergency braking system (which will automatically apply the brakes should it detect an impending collision) scored maximum points.

Aside from beating any other car tested in 2017, it also scored 98% in the adult occupant assessment – one of the highest scores on record.

The VW Arteon, best in the executive category, was praised for its active bonnet in the safety assist test. Sensors in the bumper detect when a pedestrian has been struck and the bonnet is lifted upwards, away from the engine, to mitigate injuries sustained.

Euro NCAP only recently added the ‘safety assists’ category to its testing programme, but such active safety features are now vital if a car is to be awarded a full five-star rating. 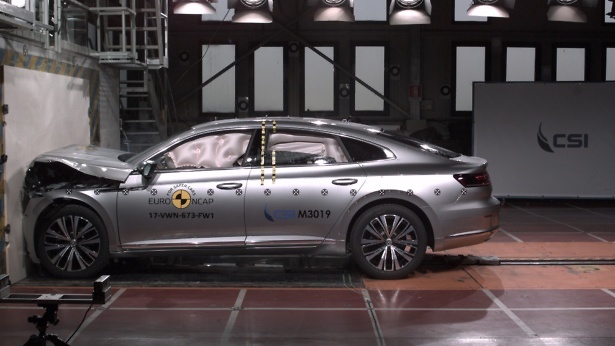 At Which?, we also put cars through an avoidance and stability test. This examines how stable and controllable a car remains when swerving round an object at speed. Watch our exclusive video and discover what happened when we put the new Nissan Micra through our crash avoidance test.

The Vauxhall Crossland X was rated best small MPV (despite being an SUV-styled crossover), while the new Subaru XV crossover and Impreza hatchback were jointly awarded best small family car.

This comes as no surprise after both Subaru’s scored 89% in the child occupant tests, higher than any other model in the top five. 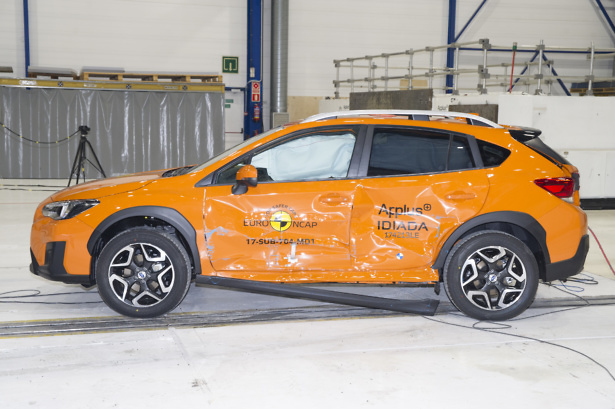 Each car we review at Which? undergoes over 320 independent tests, examining everything from boot space to mpg. Take a look at other Volkswagen, Volvo, Vauxhall and Subaru models in our new and used car reviews.

Which was the worst-scoring car for safety in 2017?

The worst performing car in the 2017 Euro NCAP programme was the Fiat Punto hatch, with zero stars.

The Fiat Punto scored poorly in all categories. Child occupancy safety was rated at 43%, while safety assist received a shocking 0%. This meant it became Euro NCAP’s first car ever to be awarded zero stars.

It’s a good example of how quickly car safety systems are advancing, that a car launched in 2012 is now deemed to be unsafe.

The Euro NCAP report said: ‘The Punto has a seatbelt reminder only for the driver’s seat as standard. The system on the passenger seat did not qualify for assessment, as it is not standard equipment and, therefore, the car scored no points for the front seats.’ 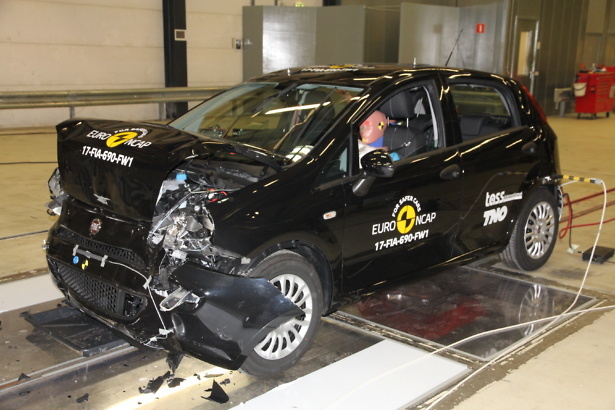 With so many safety features now being introduced to new vehicles, it can be hard to understand what to look for in your new car. Don’t risk being bamboozled by a car dealer – we explain the raft of car safety features available.

All Euro NCAP testing is based solely on standard safety equipment and the four main assessment areas are: adult occupant, child occupant, pedestrian and safety assist.

In all, 51 of the 69 models tested were new to the market this year. As the star ratings cannot be compared directly between categories, due to the vast differences in models, they are split into their classes and rated against their direct competitors.

The tests are made to mirror real-life scenarios. The star ratings don’t just reflect the safety features and how well they score, but also how readily available the safety equipment is to consumers in Europe.

We don’t just score safety in our rigorous car tests. We also look at reliability, comfort, ease of driving and emission levels. Find out which cars excelled in our tests by heading to our round-up of the top cars for 2018.