New Which? research has found huge variation in the calorie, fat, saturated fat and salt levels of pizzas. But finding the healthier options can be quite a challenge. 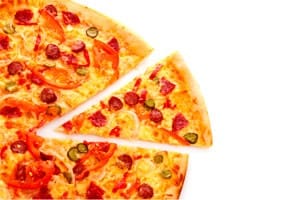 Our analysis of 162 supermarket and takeaway cheese and tomato and pepperoni pizzas shows that you could be eating treble the fat and salt and up to five times as much saturated fat weight for weight for the same variety of pizza.

Choosing a healthier pizza is almost impossible due to the enormous and often unrealistic range of portion sizes used, even by the same manufacturer, together with different front of pack nutrition labelling schemes – something Which? has long for greater clarity on.

The best and worst

Dr Oetker Chicago Town Edge to Edge Deep Pan Miami Meaty Pizza was among the highest out of the pepperoni pizzas for both saturates and salt.

For pepperoni lovers, The Co-operative fresh Italian Inspiration Stonebaked Pepperoni was among the lowest for calories, fat and salt.

What we want to see

Our findings reinforce the need for continuing action by the food industry to reduce salt levels, but also saturated fat and calorie levels where possible as part of the government’s Responsibility Deal. Shoppers also need clearer and more consistent labels, including use of .

Tell us what you think by joining our Which? Conversation piece here.

In the meantime, the best solution to takeaway temptation is to cook your own healthier food. Take a look at our advice on George Foreman grills.

This file requires Microsoft Excel. If you do not have Excel you can use Open Office or Google docs (requires Google account) to view the file.