In more than a third of areas in the UK, none of the highest-risk food businesses met minimum food hygiene standards in 2016/17.

Exclusive Which? analysis of Food Standards Agency (FSA) data also revealed that, in one London borough, none of the 34 high-risk food premises met hygiene expectations.

Meanwhile, the authorities responsible for enforcing food safety are increasingly under-resourced. There was, on average across the UK, one member of staff policing 403 food businesses.

Plus, there were 1,697 more businesses operating without a food hygiene rating in 2016/17 than two years previously.

Meanwhile, there were 85,220 consumer complaints about food quality and hygiene in 2016/17; 23.5% more than the previous year. So we’ve analysed data from the FSA to reveal the best and worst areas in the UK for food hygiene.

Read on to find out how your area compares.

Birmingham was the worst-scoring area in the UK in our food hygiene analysis.

Local authorities are meant to rate businesses within 28 days of opening to make sure they’re up to scratch and to determine how often they need to inspect them in future. But, in Birmingham, 16% of food businesses hadn’t yet been rated.

The Lancashire borough of Hyndburn, where the biggest town is Accrington, was the second-lowest scoring area.

Just two in five of its high and medium-risk food businesses met food hygiene standards, compared with 98% in Harrogate, which is about an hour away in North Yorkshire. 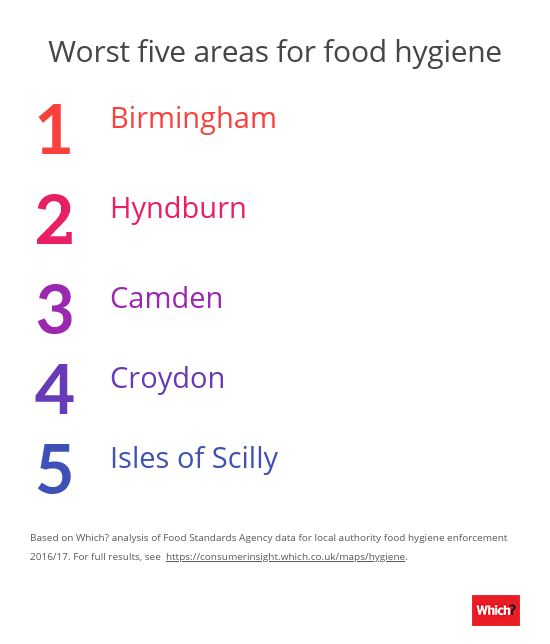 The London boroughs of Camden and Croydon, and the Isles of Scilly complete the five lowest-scoring local authorities.

In total, four of the bottom 10 local authorities were London boroughs, which also included Lewisham and Waltham Forest.

Falkrik, Glasgow and Edinburgh also ranked in the bottom 10 in 2016/17. Just 5% of Glasgow’s 92 high-risk businesses broadly comply with food hygiene standards, and 9% of Edinburgh’s 69.

Know your rights: I got food poisoning while eating out, can I get my money back? 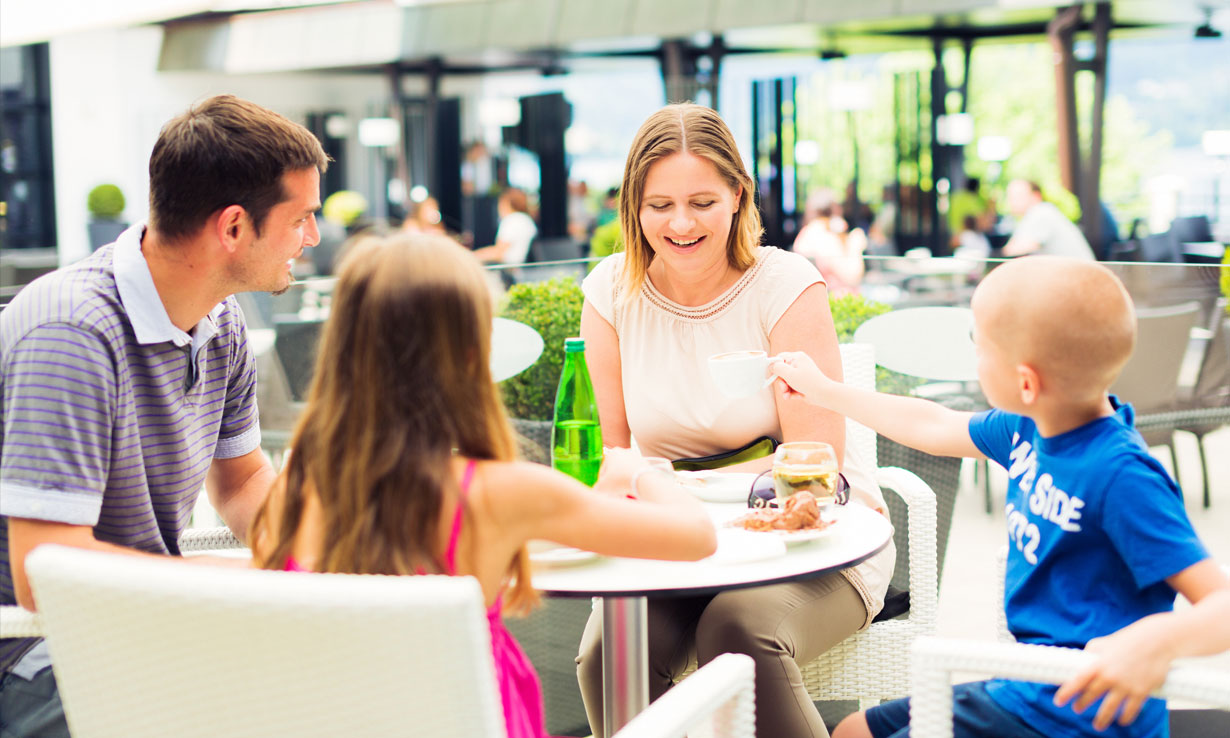 What the local authorities told us

We contacted the lowest ranked authorities about our findings. Several responded that the data is historic. Hyndburn, the Isles of Scilly and Kingston said they have since improved.

Birmingham told us that it has inspected the second-highest number of premises and closed more than any other English local authority. Birmingham, Camden, Glasgow and Newham said that the number of new businesses opening is a challenge.

Hyndburn said 92.5% of its food businesses are now compliant and it has ‘taken significant strides to improve food hygiene performance’. Camden, Croydon, Glasgow, Hyndburn and Liverpool all stated that they are employing more staff.

We’ll be analysing the FSA’s new data this summer to look for improvement. 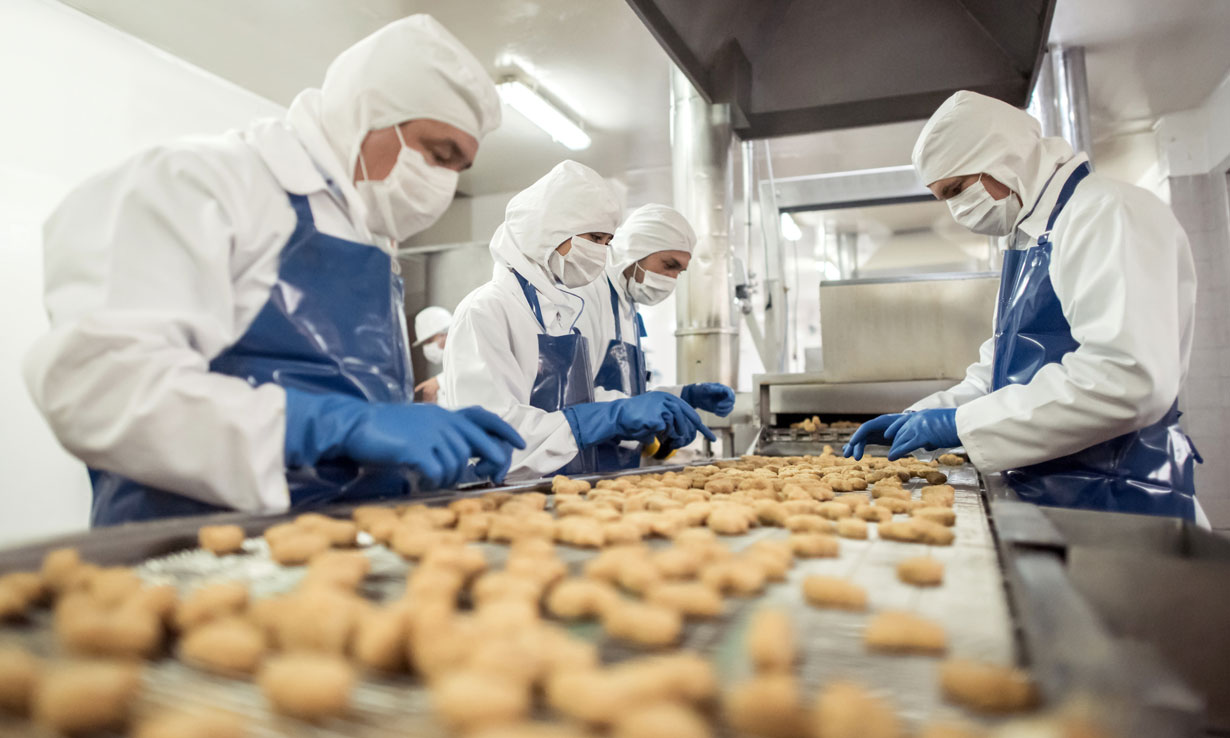 Erewash in East Derbyshire was the highest-rated area for food hygiene in our analysis. An impressive 97% of its high and medium-risk food businesses were compliant. Plus, it took action on all companies found not to be up to scratch.

The borough of Basingstoke and Dean in Hampshire comes a close second, with 96% of high and medium-risk food businesses meeting minimum standards. 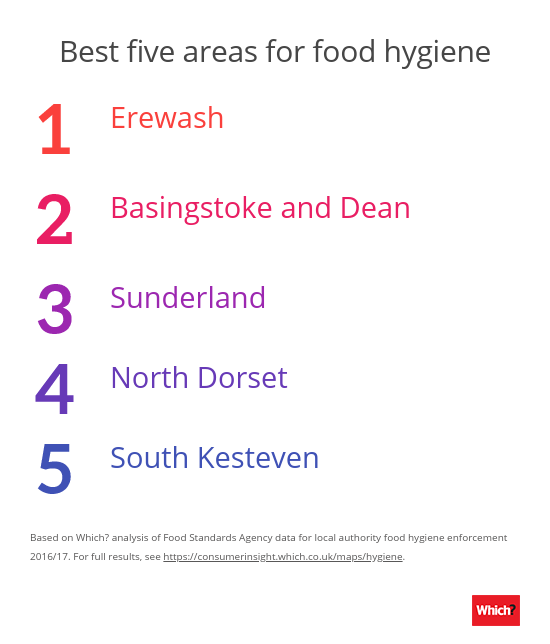 But Hertfordshire council Three Rivers was the most-improved local authority. In our 2015/16 investigation, it ranked among the poorest-performing quarter of areas. In 2016/17, it was among the top 20%.

North East Derbyshire, South Hams in Devon, Powys in Wales and the London borough of Redbridge were the other top-five most-improved areas. 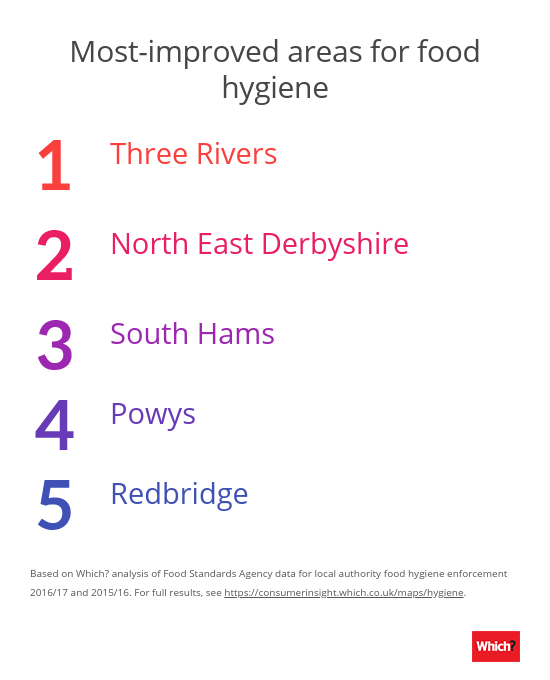 How to check a restaurant or café’s rating

You can find the hygiene rating of a food business before you visit. They’re rated on a scale of zero (worst rating) to five, set by the FSA, apart from in Scotland where the FSS rates them either ‘pass’ or with ‘improvement required’.

In Northern Ireland and Wales, it’s mandatory for food businesses to display their ratings. You’ll often see them in windows or pinned up inside. In England and Scotland, it’s voluntary.

You can check up-to-date ratings of all businesses online. Search the FSA’s food hygiene ratings for places in England, Northern Ireland and Wales, or use the FSS’s food hygiene information tool for Scotland. 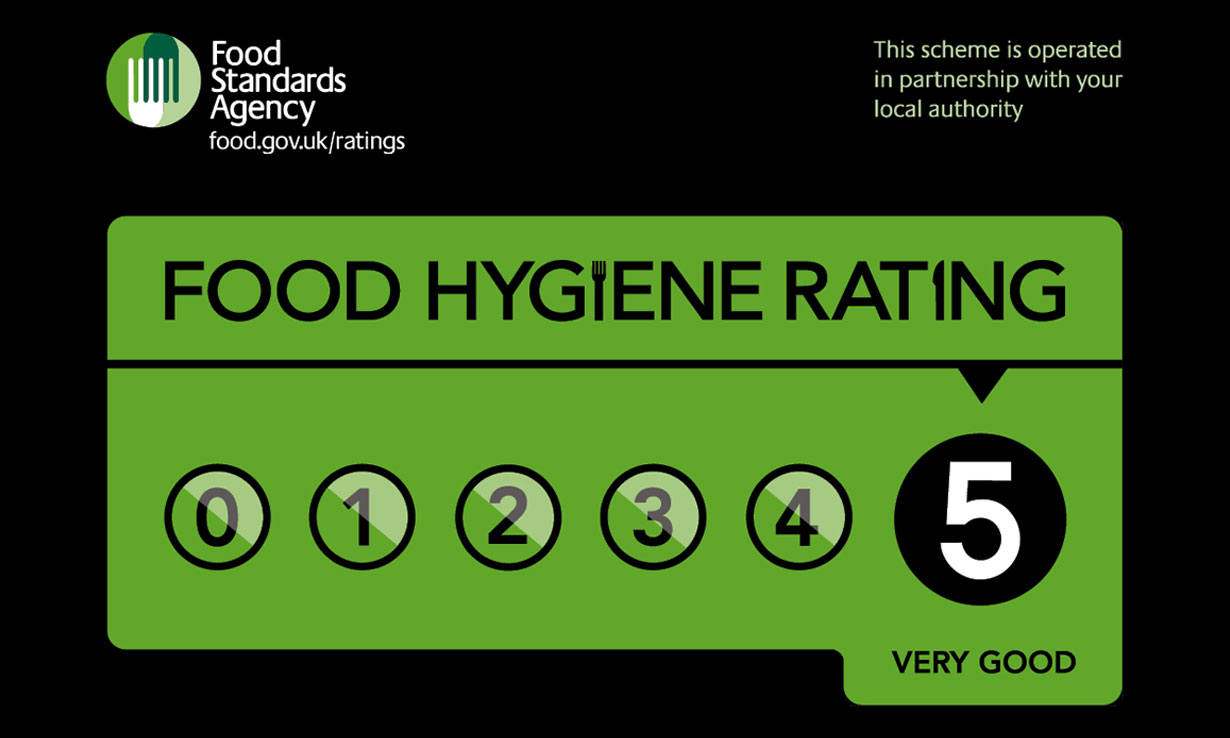 We used data from the 2016/17 Local Authority Monitoring System (LAEMS), collected by the Food Standards Agency (FSA), to monitor food hygiene compliance. The data covers all food businesses, from abattoirs to takeaways, cafés to care homes.

We used the data to rate 390 UK local authorities on the percentages of:

The FSA told us that it follows up on local authorities’ performance and any issues as necessary. The FSA will publish new data this summer – we’ll be analysing it to look for improvements.

Ian McWatt, director of operations at the FSS, said that our analysis of the data doesn’t take into account the ‘wide range of enforcement actions and other initiatives applies by local authorities’, nor reflect local authority enforcement policies, resources, and responses to FSS audits.

The data we’ve analysed for Scotland is collected, checked and submitted by the FSA.