Which alcohol-free beer is best? We’ve tested the biggest brands including Becks, Heineken and Peroni along with supermarket brand Lidl to see which comes out on top.

Whether you’re choosing not to drink alcohol or watching your calorie intake, you want to make sure your alcohol-free beer is as tasty as possible.

Only one brand scored well enough in our panel taste test to gain Which? Best Buy status, beating more familiar options from Becks and Heineken.

What makes a good alcohol-free beer?

The biggest challenge for any alcohol-free beer is delivering the same flavour as its alcoholic counterpart.

Unlike so-called ‘dealcoholised’ beers that have 0.5% alcohol by volume (ABV), beers can only be marketed as alcohol-free if they are less than 0.05% ABV.

Did you know? You’d have to drink 100 alcohol-free beers to consume the same amount of alcohol that’s in a single bottle of a standard 5% ABV beer.

As the production of alcohol during the brewing process is essential to the flavour of a beer, it’s difficult to produce an alcohol-free beer that can mimic the taste if there’s one hundredth of that all-important alcohol content to provide the flavour.

The winner of our taste test managed to deliver just enough to make itself a viable alternative to alcoholic beer, with a refreshing flavour and the right level of carbonation to give that beer-like experience our panel craved.

This wasn’t the case with many beers tested, though, with the poorer-performing offerings coming in for criticism for a multitude of reasons, including weak or overly strong flavours, as well as too much fizz and too few bubbles.

When we asked each member of the panel whether they would see the top-scoring option as an valid alternative to an alcoholic beer in a social situation, the majority said they would, although many would not.

Which alcohol-free beers did we test? 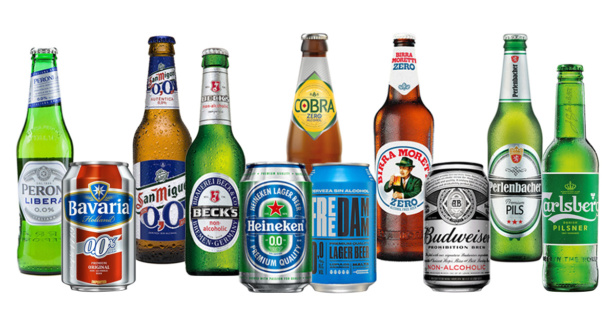 Do alcohol-free beers have health benefits?

The answer to this question depends what you’re comparing them to.

Up against alcoholic beers, they are of course substantially better for you. Alcohol inhibits judgement, slows reaction times, is known to cause liver damage and some cancers. By reducing your intake, you reduce your risk of health problems directly associated with alcohol consumption.

Of course, a nice glass of freshly squeezed juice or a vegetable smoothie would probably be better for you overall, but rocking up to a summer barbecue with a bottle of green sludge might attract some funny looks, or be mistaken for burger relish.

If you’re avoiding booze for any reason but don’t want to attract attention or simply want to take a break between alcoholic beers, an alcohol-free beer is a good option.

There’s also the added benefit of these beers being low in calories.

Depending on the method by which the brewer reduced the alcohol content of its beer, it’s possible for an alcohol-free beer to have less than half the calories of its alcoholic equivalent.

Calories in the alcohol-free beers we tested

How we found the best alcohol-free beer

The beers were assessed by a panel of people who regularly buy and consume alcoholic lager beer. The make-up of the panel broadly represents the demographic profile of adults in the UK.

Each alcohol-free lager beer was tasted 64 times. The panellists rated the taste, mouthfeel, aroma and appearance of each product and told us which one they preferred overall. The taste test was blind, so the panellists didn’t know which brand they were trying.

The order they sampled the beer was fully rotated to avoid any bias. Each panellist had a private booth so they couldn’t discuss what they were tasting or be influenced by others. The overall score is based on:

Prices correct at the time of writing