An easy Yorkshire pudding is a tempting option when you’re otherwise occupied with preparing a Sunday roast. Which? consumer taste testers have blind tasted and rated nine supermarket own-brand frozen Yorkshire puddings along with the big brand: Aunt Bessie’s.

Two were good enough to be named Best Buys, but Aunt Bessie’s was not the brand that made it to the top spot, with a supermarket own-brand taking the crown.

The puds were rated based on taste, texture, appearance and aroma. Only those Yorkshires that scored highly on all counts could be named a Which? Best Buy.

Discover the best Yorkshire puddings which rose to the occasion and those which fell flat. 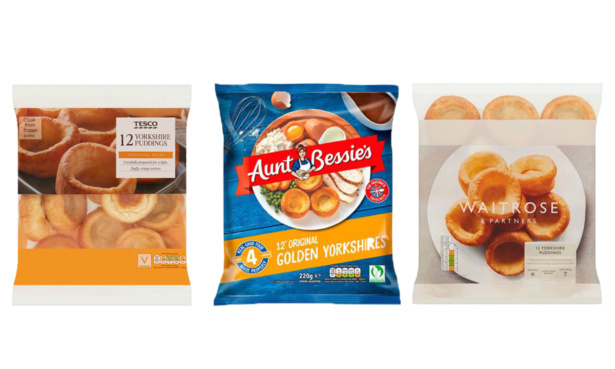 You might think that store-bought Yorkshire puddings would be pretty similar, but we found a huge gulf between the very best and worst puds on test. Texture was one area where they varied the most.

Get the exact result you want by making them yourself: How to make Yorkshire puddings.

Do you eat Yorkshire puddings on Christmas day?

As we approach the festive season, we asked 989 Which? members who celebrate Christmas whether Yorkshire puddings would usually be served as part of a Christmas lunch.

In our Which? member poll conducted in October, just 37% of 989 members said they would serve a Yorkshire pudding on a Christmas dinner plate. Could this be the new cream or jam first on a scone debate? Perhaps not, but if you don’t normally add Yorkies for fear of taking up too much precious time and oven space, keep in mind that frozen Yorkshire puddings take as little as four minutes to heat in the oven, so could be a popular – and easy – addition to your big day.

Have your say and cast your vote: Christmas dinner: will Yorkshire puddings be on your plate?

Read our how-to guides for step by step advice on cooking the complete Christmas dinner.