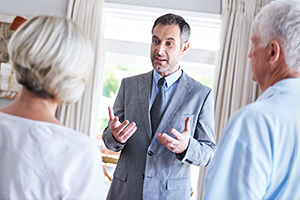 A Which? survey of 530 stairlift customers has found that 43% experienced at least one dodgy sales technique.

We surveyed people who had got a stairlift for themselves or – in around eight out of 10 cases – for a loved one, and found that 13% of stairlift owners* had felt under real pressure to buy.

However, a higher proportion experienced sharp sales tactics, with 43%** having been subjected to pressure-selling, pressure to choose a more expensive model and/or an excessive number of sales calls.

Some stairlift brands exhibited better sales practices than others. Find out how Acorn, Handicare and Stannah Stairlifts compared in this respect, as well as for prices (both new and second-hand) and reliability.

Nearly one in five (16%) of those we surveyed experienced large amounts of sales calls about the stairlift, with 14% describing these calls as ‘high-pressure’.

There was noticeable differentiation between stairlift brands.

One stairlift owner told us: ‘Originally I applied to an advertisement which invited one to receive a free “independent booklet”. As a consequence I received numerous phone calls from the company over about two years.’

Our stairlift brands review reveals which manufacturers were the best and worst for sales practices and also reliability, comfort, quality and value for money.

Stairlifts are a significant purchase, with people paying an average of £2,084. The industry code of practice says you should expect to see prices detailed upfront at the earliest possible stage, including in advertising and on websites.

Our survey found that stairlift salespeople often quote a high initial price and then offer a discount. Anecdotal evidence suggests that they might ‘phone their manager’ and then offer a greater discount for a same-day purchase. Some will withhold prices until the end of the discussion or visit.

We found that a quarter (24%)* of people successfully negotiated a reduced price, so it’s always worth asking whether the figure you’ve been quoted is the best available.

Which? Principal Health Researcher Joanna Pearl said: ‘People buying stairlifts are often vulnerable because they’re buying at a difficult time, but stairlifts can make the difference between remaining independently in your own home or having to move. It’s really important that people have clear and transparent pricing and aren’t pressured to buy in already stressful circumstances.’

For expert advice on obtaining quotes and getting the best deal for you, see our guide on buying a stairlift.