Huawei’s stellar rise has led to it eclipsing Apple as the second-largest smartphone brand globally, but in recent months, its success has been shrouded by Google’s suspension of its Android licence.

This only applies to new phones, though. Google has reassured Huawei users that its core services will keep functioning on existing devices, and Huawei is confident that its most popular devices, including those featured below, will be able to access the upcoming Android 10.

With many of its phones having dropped significantly in price already, this smartphone brand could be the one to watch for the best value around Cyber Monday.

We’ve taken a closer look at each of Huawei’s recent flagships, plus how much you could buy them for right now, so you can work out which models to keep an eye on during the sales.

Find out how many of Huawei’s models made it on to our list of the best smartphones money can buy. 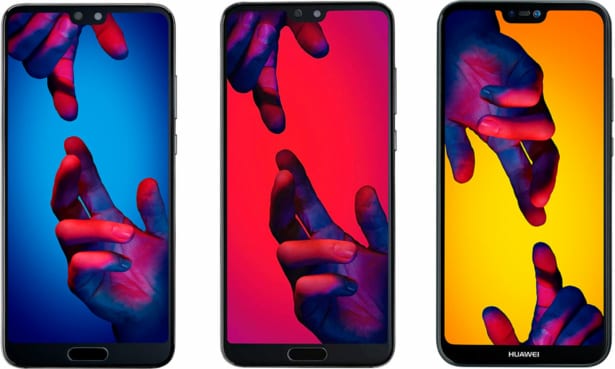 When this range first launched in 2018, it garnered huge attention as the new ‘must-have’ smartphone for photography. The P20 line-up saw numerous firsts for the manufacturer.

These smartphones were the first in the P series to receive DxOMark certification for their camera quality (benchmark testing for digital cameras, lenses and smartphone cameras). The P20 Pro was also one of the first smartphones on the market to feature a triple rear camera lens.

As well as setting new standards for their cameras, the Huawei P20s also introduced fuller displays and a faster processor with the Kirin 970 chipset, an upgrade from the Kirin 960 chip found in the Huawei P10 and P10 Plus.

The figurehead of the 2018’s P series, the Huawei P20 has a large 5.8-inch Full HD+ display, powerful processor and a respectable 4GB of Ram.

But the main event is clearly the cameras. The P20 hosts a dual rear camera with two wide-angle lenses – 20Mp and 12Mp. Although the rear lenses are almost identical to the ones you’ll find on the Huawei P10, the front camera saw a massive upgrade up to 24Mp from 8Mp on its predecessor.

The flashier model of the trio, the P20 Pro sees huge upgrades from the P20. It features a larger 6.1-inch display and a triple rear camera lens, which includes the introduction of a telephoto lens to capture photos from a distance.

For the more budget-conscious, the P20 Lite is a stripped-back version of the other two. Like the P20, it has a 5.8-inch Full HD+ display and runs on 4GB of Ram. But their similarities don’t go much further.

The cheaper price of the P20 Lite is thanks to its lower spec processor and less flashy dual rear cameras (16Mp and 2Mp). However this model does a dual selfie camera (24Mp and 16Mp) that you won’t find on the others. 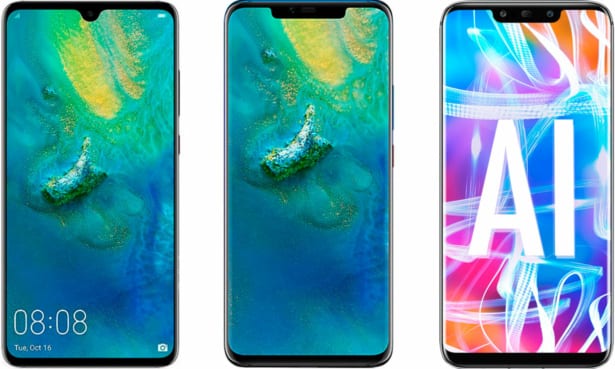 Six months after launching the P20 series, Huawei unveiled the Mate 20, which built on the impressive specs of its rival flagship. Like the P20s, the Mate 20s earned their own headlines when they launched in October 2018.

The biggest talking points on this phone are the introduction of the world’s first 7 nanometre AI-powered chipset, which essentially means that the transistors inside the processor are smaller so you can pack more of them into the chip and thus increase power, efficiency and speed.

These phones also saw the introduction of reverse wireless charging, otherwise known as power sharing. This innovative feature enables you to use your Mate 20 Pro to charge other Qi-enabled devices, sharing your battery between them.

Where specs are concerned, the Mate 20 stands as one of the phones to compete with on the market. It still has one of the largest screens you’ll find on a flagship phone – 6.53-inch Full HD+ with a huge 88% screen-to-body ratio – even when compared with new models such as the Google Pixel 4 and Samsung Galaxy Galaxy Note 10.

It has a triple rear camera like the P20 Pro, but with very different specs. It has a 16Mp ultra-wide, 12Mp wide and 8Mp telephoto lens. The front camera is a 16Mp wide-angle lens, which is twice the resolution of the previous Mate 10’s.

There are three big differences between the Mate 20 Pro and Mate 20: battery, camera and display. The Pro model has some advanced battery capabilities, including wireless charging, more powerful fast-charging technology (40W compared with 22.5W on the Mate 20) and the most innovative of them all, reverse wireless charging.

On the camera front, the Mate 20 Pro is a step up – 40Mp wide angle, 20Mp ultra-wide angle and 8Mp telephoto lenses – although its front cameras are the same as the Mate 20. Finally, it has a slightly smaller 6.39-inch display, but its resolution is higher.

This model is once again more basic, but still has a large display (6.3-inch Full HD+ screen).

The blockbuster camera setup that the series is known for is scaled back quite a bit with this model. It has two rear cameras instead of three (20Mp and 2Mp), but does compensate with a similar dual front camera (24Mp and 2Mp). 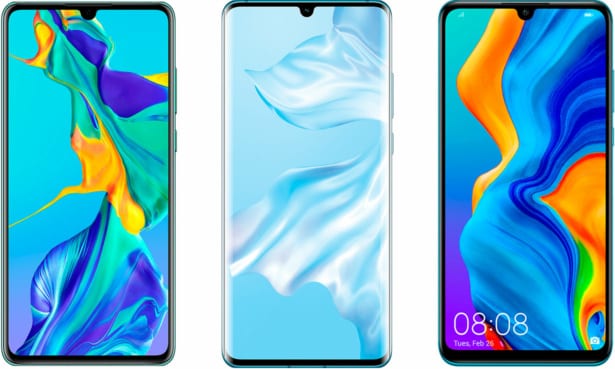 In its most recent installment of the P-series, Huawei promised to ‘rewrite the rules of photography’ and, as with the P20s, the main focus of this series is its camera experience. The P30 Pro is one of the first smartphones to host a fourth camera lens, which in this case is a ‘time-of-flight’ lens.

This lens judges distance by measuring the time it takes for a reflected beam of light to make a round trip to the camera sensor, and the phone’s software compares this with the known speed of light. The aim of all this fancy tech is to take sharper photos from a distance.

For anyone who already has the P20, the P30 is a logical upgrade, and Huawei has made that decision easier by kitting out its newer model with some notable improvements.

Cameras are the key talking point – it delivers a 40Mp wide angle, a 16Mp ultra-wide angle and an 8Mp telephoto lens, and the front camera is a high-resolution 32Mp. As for other features, it has a 3,650mAh battery that is marginally larger than the 3,400mAh one found in the P20. It has the same IP53 rating and fast-charging capacity as its predecessor.

The star of the trio, there are a few differences in the P30 Pro, particularly where the camera is concerned. As with the P30, it has a 40Mp wide-angle lens, but upgrades the ultra-wide lens to 20Mp.

The P30’s 8Mp telephoto lens has been given a few tweaks to make it a ‘periscope lens’ on the P30 Pro, giving the phone higher optical zoom functionality. Then, of course, there’s also the ‘time-of-flight’ lens to top off the quad camera.

Elsewhere, the phone has a larger display than the P20 Pro (6.47-inches) and a higher waterproof rating of IP68, so your phone is protected in water up to 1.5-metres deep for a maximum of 30 minutes.

This model follows the same format as the other ‘Lite’ devices. It has a smaller 6.17-inch display, but with a 90% screen-to-body ratio.

If you go for this model over the other P30s you’ll save a good chunk of money, but you’ll get a less powerful processor and less extravagant camera array with a 48Mp wide-angle, 8Mp ultra-wide angle and 2Mp depth sensor.

On the hunt for a tech bargain? Read our guides to the technology products and brands to keep an eye on this Black Friday.