We tested 20 kids’ Halloween fancy dress outfits which are being stocked by online and high street shops and supermarkets including Sainsbury’s, eBay and Amazon.

Two of the outfits in our tests did not meet the requirements of the British safety standard (BS EN 71-2). These were a Maleficent costume, which we bought from eBay but is made by Spanish company Fiestas Guirca, and a werewolf costume from B&M. Both pictured above.

The headpiece on the Maleficent outfit and the moulded mask that came with the werewolf outfit burned too quickly to pass.

Which Halloween costumes are less flammable?

Some fancy dress costumes are tested to a stricter flammability level than what’s required by British law. This is a voluntary code of practice produced and designed by retailers and manufacturers in collaboration with the British Retail Consortium.

It was set up following media furore after Claudia Winkleman’s daughter experienced serious burns in 2014 when her Halloween outfit caught fire.

If you’ve bought a fancy dress costume that subscribes to these stricter safety requirements, you may notice additional labelling or wording stating that the garment has undergone additional testing.

The additional testing includes ensuring that the maximum permitted rate of spread of flame is 10mm per second (as opposed to 30mm per second in BS EN 71-2, the British standard).

When we tested Halloween outfits, we also checked whether they would meet these higher requirements as well as the British standard.

Fifteen costumes we tested met the British standard as well as the additional requirements of the voluntary code of practice. You can see these in our table of results below.

Three costumes we tested met the safety standard, so are legal to sell, but in our tests didn’t meet the requirements of the British Retail Consortium code of practice.

These were a Skull Witch outfit from B&M, a Ghostbusters outfit by Rubie’s and bought from Amazon, and an unbranded Witch outfit purchased from eBay.

Despite failing the British standard, the Werewolf outfit from B&M did meet the requirements of the BRC Code of Practice. This is because it failed the British standard because of the mask. The additional testing is primarily only carried out on the main clothing parts of the outfit. The BRC code does not require testing of any moulded masks or accessories.

Watch the difference in burn rates for different costumes

You can also see how a homemade Halloween costume – made from a cotton sheet – burns way more vigorously than all of the costumes we purchased.

Full results of our testing 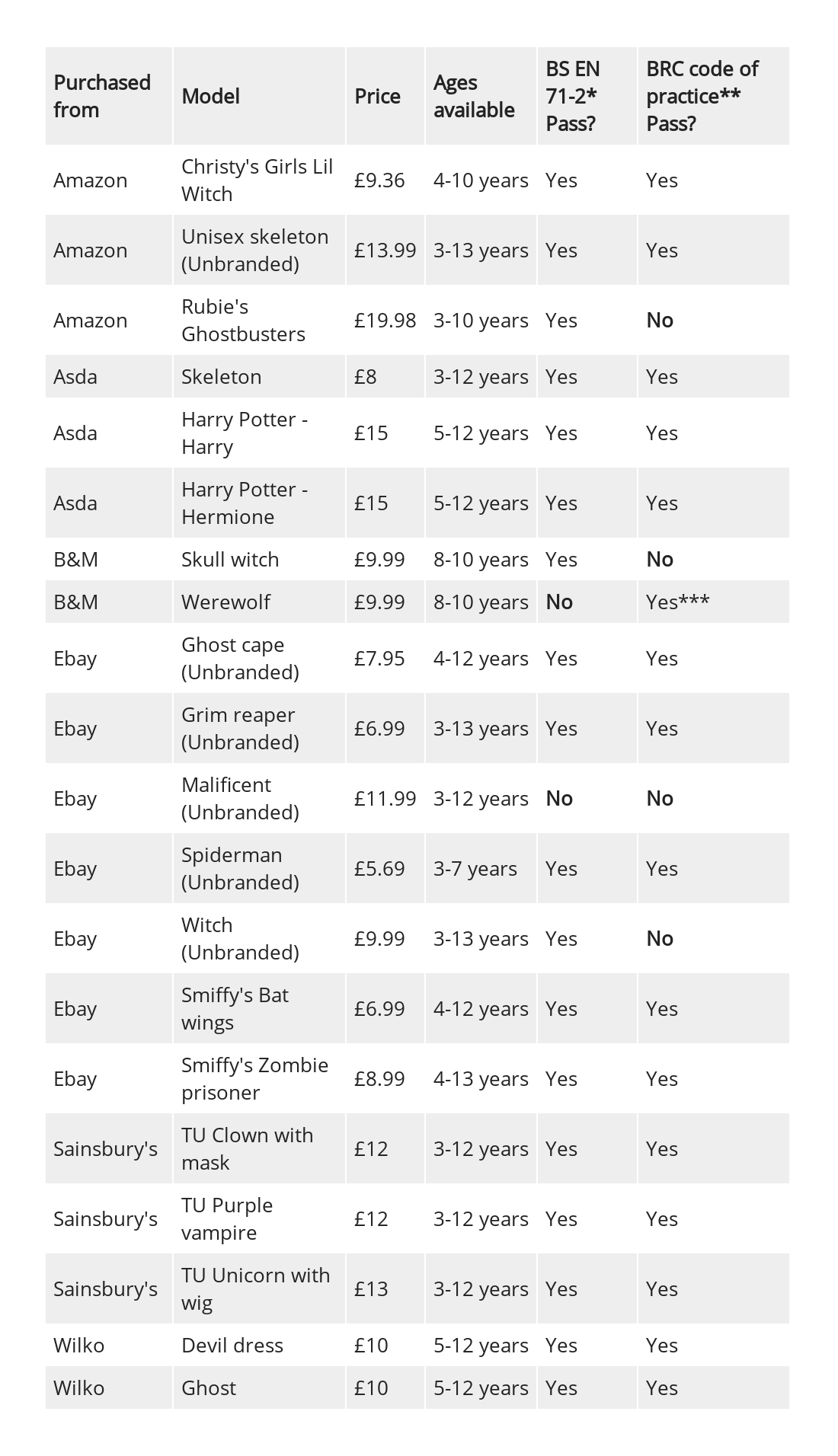 Table notes:
*EN 71-2 is the British standard that covers toys. If an item of fancy dress clothing fails to meet the requirements of this standard, it should not be on sale.
**BRC code of practice: It has had additional testing carried out on the main clothing parts of the outfit. The BRC code does not require testing of any head gear or accessories.
***The mask of this costume failed the British standard. The mask isn’t subject to the extra BRC guidelines. Hence this costume adhered to the BRC guidelines.

What retailers told us

When we contacted B&M, it told us that the werewolf outfit has already been recalled and that it’s accepting returns, refunds and exchanges.

Ebay told us that the listing featuring the Malificent costume has now been removed and it has reached out to the seller to ensure that they contact all buyers regarding this issue and to offer them a full refund.

Ebay has said it will be keeping an eye out for any listings which are believed to be the same item, and stated: ‘The safety of our customers is our number one priority and we work closely with trading standards to keep our marketplace safe. We have removed this item and will continue to monitor any listings.’

We’d advise parents to watch out for these costumes being stocked elsewhere.

How to keep your children safe

We’re calling for manufacturers and retailers to only stock those costumes which meet the BRC guidelines.

‘Which? urges all manufacturers and retailers to adopt the BRC code as a standard. Any items that fail fire safety tests must be removed from sale and discontinued immediately.’

‘We have led the way in developing guidance and tools to help all companies test products to a standard above those required by UK and EU regulations. This guidance, which we continue to review and refine, aims to protect consumers and provide customers with reassurances about the safety of the products they purchase.

‘Whilst this is a valuable tool for all companies, we are still recommending that the UK Government and EU authorities revisit the standard that delivers compliance to the regulation in order to ensure all products on the market are effectively regulated to reflect the hazards presented by today’s style of costumes, including the fabrics and finishes used.’

We’d also advise parents to check for labelling on the costume itself and the packaging, which indicates that it meets the requirements for stricter testing of the BRC guidelines. 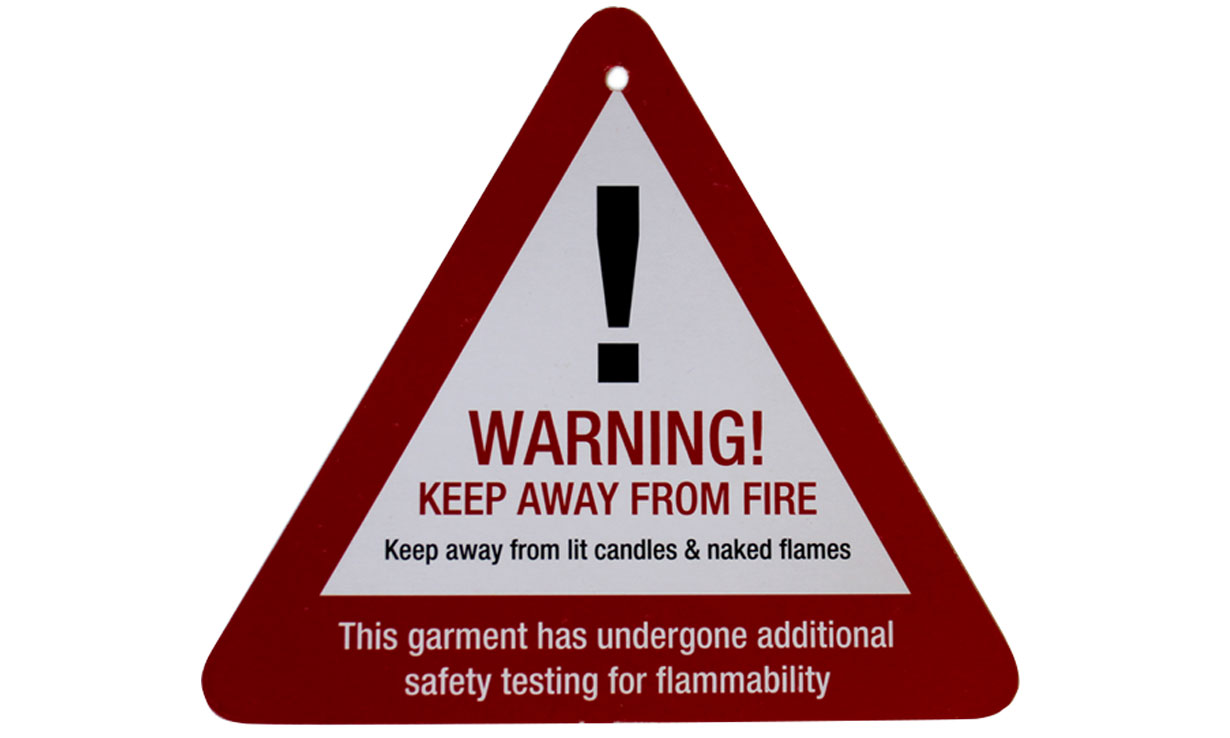 But as we’ve seen, all costumes, whether homemade or shop bought, will burn. So it’s important to stay vigilant at Halloween.

Watch this video to see how the Werewolf mask that failed the safety standard went up in flames and to hear from the survivor of a Halloween outfit fire.

In the event of a Halloween fire emergency…

STOP don’t run, you’ll make the flames worse.
DROP down on the ground at once.
ROLL in heavy fabric or a fire blanket to smother the flames, though just on the ground will help.
COOL the burn with running cold tap water for 20 minutes and remove all clothing and jewellery from the area (unless it is melted or firmly stuck to the wound)
CALL for help.
COVER the burn with cling film or a sterile, non-fluffy dressing or cloth.