Football is back, and if you believe the hype, this season will be more nail-biting, eye-popping, thigh-squeezing and fist-pumping than ever before.

This pre-season frenzy is of course whipped up to encourage you to subscribe to premium TV channels, and unless you’re lucky enough to have a season ticket, you’re probably weighing up the cost.

But not every football fan will be willing to splash out on a package to cover the whole season, and even if you can, only the most fortunate get to watch every match.

Thanks to a selection of mobile apps, wearable apps and smart hub commands, there’s no reason to miss out on a minute of the action. Below, we’ve rounded up your options, including some of the best free ways to keep track of your team over the course of the Premier League season.

How much does it cost to watch the Premier League?

Every Sky customer starts with the Entertainment pack after signing up, which is £20 a month. If you want to add a single sports channel to your package (Sky Sports Premier League, for example) you’ll pay an extra £18, which totals £38 a month. As the Premier League ends in May 2019, that means you’ll be paying £380 for a season’s worth of coverage.

BT Sport can be added to Sky TV for free for 18 months if you have BT broadband. Without BT broadband, BT Sport HD on Sky is £34.49 per month over a 12 month contract. That’s a total spend of around £345 for the season.

If you’re not willing to shell out the best part of a grand, there are plenty of ways you can use technology to get line-ups, live scores, news, match reports, interviews and more.

We take a look at how smartphones, wearables, radios and smart hubs can keep you in the loop for the season, wherever you may be.

Catch the match on a smartphone 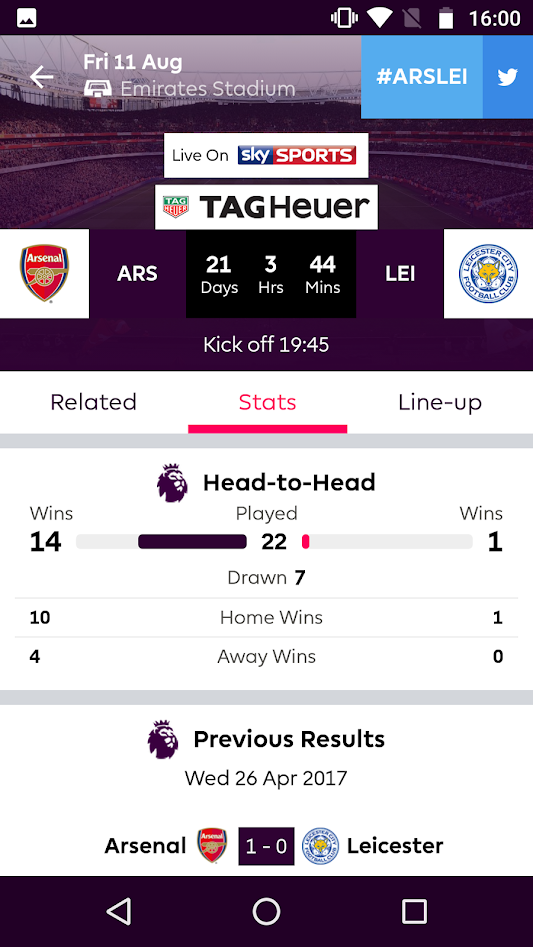 If you’re looking for a football app to keep you in the loop, this is the obvious choice.

First, you’ll be asked which team you support and whether or not you want to receive email alerts and push notifications related to the squad. The homescreen focuses on your team of choice, pulling in the latest headlines on transfer rumours, pre-match news and more. You can take a look at upcoming fixtures, along with picture galleries, video interviews and an overview of the table as things stand. 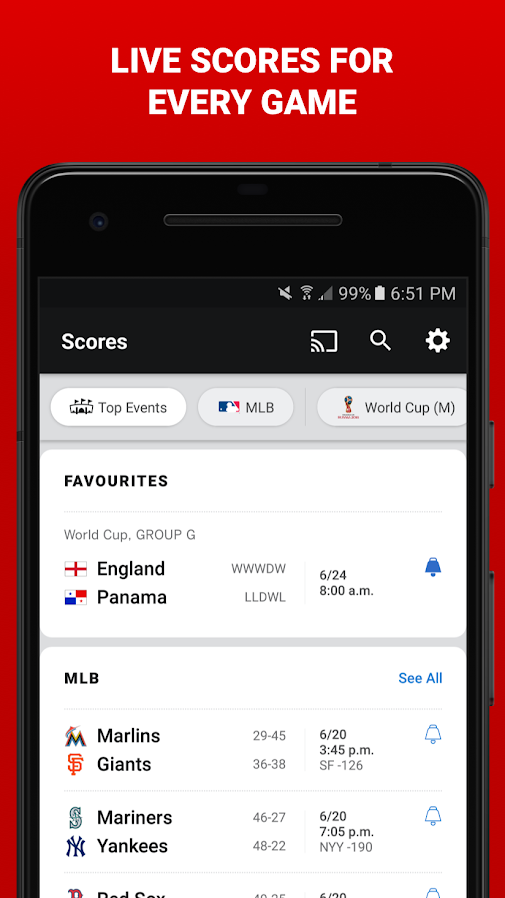 The ESPN app is a good option if you just want a quick way to check scores and nothing else. Notifications are split into categories and you can pick which ones you want to apply – options include match start, goals, final whistle, cards and substitutes.

You’ll have to pick your favourite leagues (Europa League and Champions League are included), but you can track other sports too, such as F1, cricket, rugby and golf. 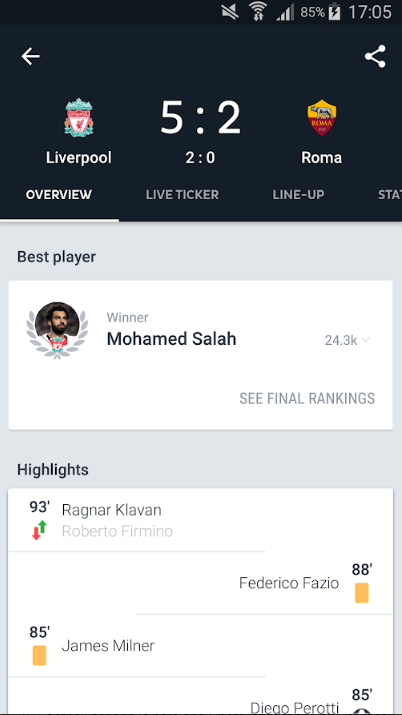 One of the best and most comprehensive alternative football apps, Onefootball has a bit of everything.

Pick your favourite team(s) and league(s) and you can view live commentary of games, get customisable push notifications for events such as team announcements and goals, read news, player profiles and more.

It’s quick, fast and light, and has global coverage as well, so is great for keeping up with the continent.

Most of the clubs in the Premier League have their own mobile apps. If you’re focused on your own team’s journey up the table and don’t want to hear about other games, this might be the way to go.

Get premier league news and scores through your smart home hub

If you have a smart home hub sat in your living room but don’t have a game streaming on your TV, you can ask the AI helper what the score is.

Keep scrolling for some handy voice commands for Amazon Alexa (Amazon Echo, Amazon Echo Dot) and Google Assistant (Google Home, Google Home Mini). Note that the same voice commands will work on your smartphone if you have either of these assistants installed.

You can use Alexa’s Sports Update tool for more detailed responses. To set it up, open the Alexa app on your smartphone and add your team to the Sports Update page. Ask your smart hub “what’s my Sports Update?” for details on the latest scores and upcoming games.

Alternatively, if your team has an Alexa ‘skill’, you can add it to the Flash Briefing through the app settings and get customised news each day.

Thinking of buying a smart home hub to help you control your connected tech? Our smart hubs explained guide explains what a smart hub can do, and which voice assistant is the most capable.

Wearable apps that send you scores and schedules 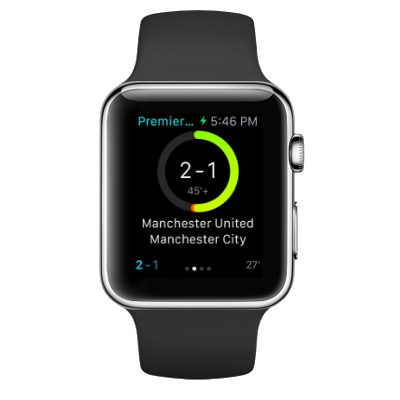 Whether you’re using an Android Wear watch or an Apple Watch, dedicated football apps can give you updates at a glance.

Forza Football for Apple Watch (free) shows you live scores on match day, and you can set custom alerts for the teams you’re interested in. Pre-match line-ups, formations and player photos are all accessible from your wrist, and you can vote on user polls to have your say on the squad and the manager.

Over on Android Wear, the free FotMob app does a similar job. It serves up live scores, match stats, text commentary and TV schedules.

The best smartwatches pair all-day battery life with a host of handy features. To see which smartwatches have topped our tests, head over to our Best Buy smartwatches.

Listen to the football on the radio 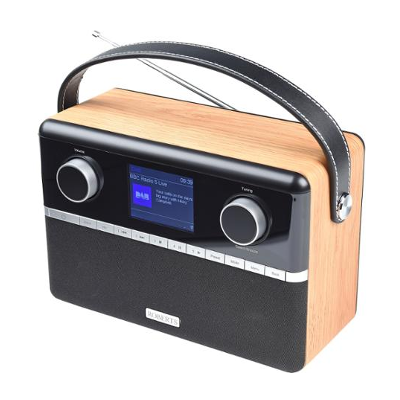 Sometimes the old ways are still the best. Listening to football on the radio could still be your best option – great if you’re driving when the match is on, or are doing some DIY at home. If you’re diligent, you’ve got the frequencies and channels firmly lodged in the old grey matter, but if not, here’s a reminder: 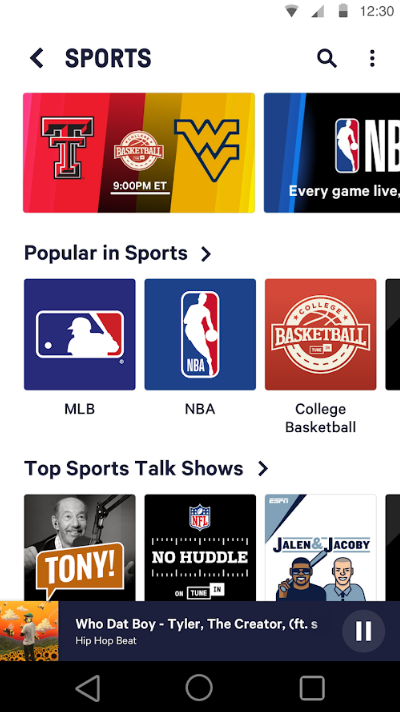 To make sure you’re uber-prepared, get a digital radio app for your smartphone that has a few important sports stations queued up and ready to go.

TuneIn Radio (Free, iOS and Android) is a good option, with over 100,000 stations, including AM/FM stations, and it can handle podcasts. It’s also Android Wear compatible so you can control it from your smartwatch. Alternatively, FM Radio (Android) or Simple Radio (iOS) are more basic FM/AM radio station tuners, and there are plenty more to choose from in the app stores.

We’ve put a range of internet radios, FM radios and DAB+ radios through their paces, uncovering Best Buys that won’t break the bank. And if you’re shopping for a digital radio, browse our expert digital radio reviews.

The best TVs for watching sport

Being able to quickly check the scores on your phone is undeniably convenient, but aside from going to the stadium, nothing beats relaxing on the sofa in front of a Best Buy television. To uncover the best TVs for watching sport, our experts pay attention to how well a TV can handle fast motion, and whether or not colour-smearing will spoil the show.

Our expert TV reviews cover the latest TVs from big-name brands including LG, Sony, Samsung and Philips. If you’re looking for a new TV to see you through the Premier League season, see our advice on the best TVs for watching sport. Alternatively, our guide on How to buy the best TV will help you settle on a brand.