Groupon, Selfridges and Amazon have agreed to remove Jawbone fitness trackers from sale, after a Which? investigation highlighted a large number of user complaints.

The fitness tracker is not currently being supported, leaving both new and existing customers frustrated at being unable to access the associated app.

Which? advises consumers to avoid purchasing any Jawbone devices until this issue has been resolved, and to consider returning any very recently purchased Jawbone products that aren’t working as they should be.

Problems with the Jawbone UP app

The companion app has now been out of action for more than four weeks, meaning that people can’t actually use their trackers.

Disgruntled users have taken to social media to report serious issues – including not being able to:

Jawbone went into liquidation last year, and the issue centers around the fact the app is not currently being supported, despite its trackers still being sold.

On 28 May, Jawbone issued a statement on its Facebook page and the @Jawbone and @JawboneSupport Twitter accounts describing a ‘transition plan’ designed to continue the UP service, and asking users to bear with them through intermittent service disruptions. 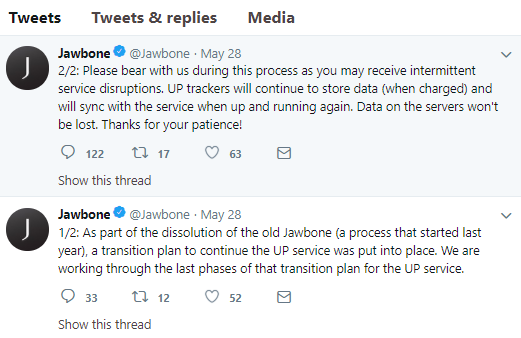 To date, the Facebook statement has attracted more than 340 comments, while the tweets have nearly 300 responses in total.

We found Jawbone trackers still for sale from well-known online retailers, despite the current issues rendering the Jawbone products useless.

If you’ve got a Jawbone product that’s not fit for purpose, you may be able to make a claim for a refund, repair or replacement under the Consumer Rights Act.

Which? found Jawbone trackers for sale online on Amazon, Groupon and Selfridges websites. We contacted all three retailers to let them know about the ongoing issues, and request that they remove the Jawbone products from sale.

Groupon, who had the Jawbone UP tracker on their deals site, thanked Which? for bringing the issue to their attention and stated:

Customer satisfaction is our number one priority and we are sorry for any inconvenience caused. On being made aware of the issue we immediately removed all deals from the site. We would ask any customers who have been affected to get in touch with our CS team at support@groupon.co.uk.

Selfridges, which had the Jawbone UP2 tracker listed on the wearable technology section of their website, confirmed on the 26 June that the tracker has now been removed from the online store. It also told us that the tracker hasn’t been in stock in the store for a year, although we had been able to add a number of UP2 trackers to our basket.

But the biggest supplier was Amazon, which had the largest selection of Jawbone trackers for sale, including devices available on Prime. It has also confirmed that these will now be removed from sale.

When will the service be up and running?

Jawbone itself has now migrated to Jawbone Health – the company founded by Jawbone’s co-founder and CEO Hosain Rahman in 2017.

Which? was told that as part of the dissolution of Jawbone, its assets have been spun out or sold on to other providers. The UP service is being shifted to a new provider, and it’s this process that has caused the current outage.

Unfortunately there is no official timeline for a return of service beyond ‘as soon as possible’. When questioned on the lack of communication from Jawbone, it told us that as soon as there is information to be shared, it will be.

Your consumer rights for faulty products

Usually it’s obvious if your device is faulty – broken straps, screens or buttons falling off are telltale signs. But many of our devices now come with a digital element that’s crucial to the operation of the physical device too, such as a companion app that is used to sync your device and your phone.

Under the Consumer Rights Act 2015, where the goods you have paid for have been designed to function with digital content (such as the Jawbone UP app) it must be:

If the device doesn’t conform to one or more of these criteria, you have the right to a remedy.

What if I own a Jawbone fitness tracker?

If you think that this affects you, your next step depends on how long ago you took ownership of the product.

If you received a Jawbone device in the past 30 days which doesn’t work, you can go back to the retailer to reject the device and ask for a full refund. This is because the product as a whole, which includes the digital component, isn’t fit for the purpose you purchased it for.

If you are outside the initial 30-day period but received a Jawbone device within the past six months that was working but isn’t any more, don’t despair. You have to give the retailer one opportunity to repair or replace your device, and they must do this within a reasonable time after your request.

If the retailer can’t offer you a repair or a replacement within a reasonable time, you can request a full refund instead.

If it has been longer than six months since you have taken ownership of the Jawbone device then you can still ask for a partial refund.

Click the link for more advice on returning or replacing faulty goods.

If you have purchased your Jawbone device before 1 October, 2015 then your rights will be governed by the Sale of Goods Act.

Which? senior researcher and wearables expert Hannah Walsh, who conducted the investigation, said ‘Retailers have a responsibility to ensure that products listed on websites or sold in stores are fully functional. This is especially relevant to products that include a digital component that’s vital to operation, which is typically the case with wearables.

‘It’s important for all retailers to ensure that suppliers keep them fully informed of any issues that customers might have, and take appropriate steps where necessary to ensure that consumers are not inconvenienced.’

Should I buy a Jawbone fitness tracker?

Not until this issue has been resolved. At present you won’t be able to register an account or sync your device, and the situation with ongoing customer support is currently unclear.

The representative from Jawbone Health told us that Jawbone trackers haven’t been officially distributed or sold in the UK for at least two years so, while they can still be found for sale, we’d recommend avoiding Jawbone products for now – no matter how cheap they are. You can take a look at our pick of the best cheap fitness trackers.